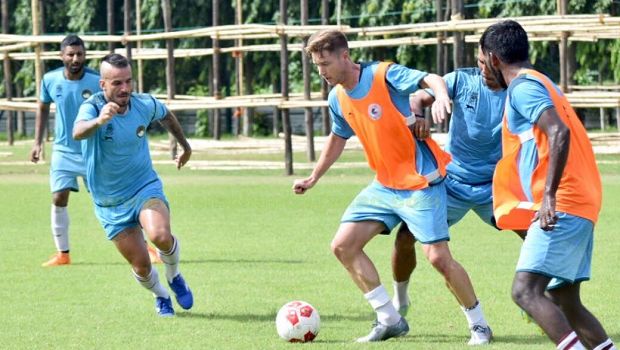 Mohun Bagan, on Saturday, extended its lead at the top of the I-league standings to 11 points after putting three goals past Churchill Brothers at home.

The results mean that the Kolkota Giants are just 3 points away from another Hero I-League title.

Mohun Bagan started the game on the front foot with a sixth-minute opener through Senegalese forward Papa Babacar Diawara.

The goal was the striker’s 7th goal in as many recent games after Joseba Beitia free-kick was headed into his path by Fran Gonzalez, and Diawara didn’t fail to tap home.

The first half failed to see any further goal, but the away team started blazing once again as they took a second through VP Suhair just 6 minutes after the restart.

Suhair, who has been one of the Kolkota side’s big performers this season, made a cut inside from the left-hand side of Churchill Brother’s box to let fly a shot that crept past the goalkeeper.

In the 58th minute of the game, a cross from Gurjinder, Bagan’s left-back was deflected into the middle of the box and was acrobaticly converted by Tajik Komron Tursunov.

There on, Churchill Brothers mounted pressure, attack on attack to find a way back into the game with Dawda Cessay and Willis Plaza forming a deadly combo which unfortunately couldn’t provide a goal as the team lost three clear cut chances in the second half.

Also, Mohun Bagan were also not without missed chances, especially with Senegalese Diawara, also culpable of missed chances for the Kolkota team.

After 13 games, Mohun Bagan are top with 32 points, 11 points clear of Punjab FC, who are their nearest challengers.

The hosts on Saturday now have remained in the third position, with 19 points gathered from 12 games played so far.