I-League: Others Fight For Pride After Mohun Bagan’s Title Win 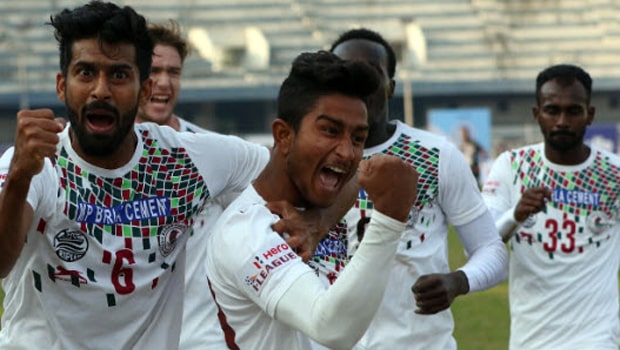 After Mohun Bagan Claimed the 2019-20 I-League season with a 1-0 win over Aizawl on Tuesday with 4 rounds of games left to play, other teams in the I-League will play for pride as the league enters Round 19.

Second-placed East Bengal with 23 points is expected to host the Newly Crowned Mohun Bagan on Sunday. Bagan best East Bangal the last time both teams met with a 2-1 victory.

Both teams are unbeaten in their last 5 games, but the champions are the most inform with 4 wins and a draw while the host has two draws and 3 wins.

Also, on Sunday, 3rd placed Punjab will host tenth-placed Aizawl. The home team’s only loss in their last 5 games came in a 4-3 loss away at NEROCA with a win, and 3 draws.

The visitors also have just a win in their last five but are winless in 4 after two losses and two draws recorded, their last win was a 2-0 win against TRAU FC on the 11th of February.

The last match on Sunday will see Gokulam hope to make it two wins in a bounce as they welcome woeful Indian Arrows who only have 9 points from 16 games, and in fact, in their last 5 games, they have drawn once and lost the rest.

Meanwhile, a day before on Saturday, Real Kashmir will welcome TRAU FC. TRAU FC’s last 5 games have been filled with inconsistencies with 2 wins two losses and a draw albeit with their last two games being the wins.

Real Kashmir are also in a similar form with two wins, two losses and a draw in their last five matches. The last time both teams faced each other, it ended in a 2-2 draw.

NEROCA will also on Saturday welcome Chennai City who drew with Maziya in the AFC Cup in midweek.