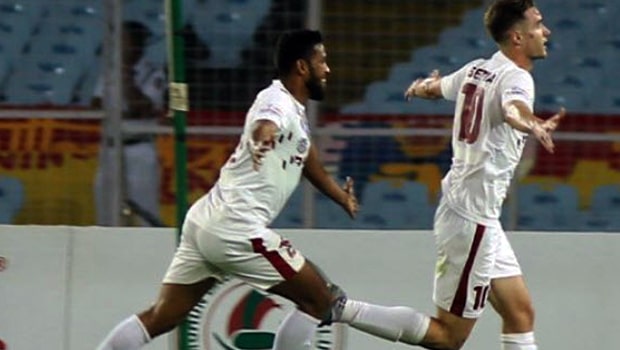 Mohun Bagan are the I-League’s most consistent and in form team as they have raked in 7 wins on the trot and are unbeaten in 12 games with just a single draw, a 1-1 scoreline against Punjab on the 14th of January.

In fact, the last time Mohun Bagan lost was a 4-2 loss to Churchill Brothers in a round 2 game played at the Kalyan Stadium on the 8th of December 2019.

TRAU FC are winless in their last 6 games with 4 losses, and 2 draws with their last win coming in a 2-1 against Aizawl on the 25th of January.

Mohun Bagan took the game by the scruff of the neck as Spanish defender Francisco Gonzalez scored a 14th-minute penalty.

A minute later, Senegal forward Baba made the score 3 to the good with his 8th goal in 7 games as Mohun Bagan became more comfortable.

TRAU FC pulled one back through Gerard Williams assisted by Joseph Olaleye eleven minutes later as the first half ended with a 3-1 scoreline.

The second half was silent in terms of goals after the first half had seen 4 Goals in total, but there was drama as Komron Tursunov got sent off after a second bookable offence in the 70th minute.

Mohun Bagan leads the I-league table with a 13-point gap ahead of second-placed Punjab with 33 goals scored and 12 conceded.

TRAU FC are 9th on the log with Sixteen points from 15 points with 15 goals scored and 27 conceded.