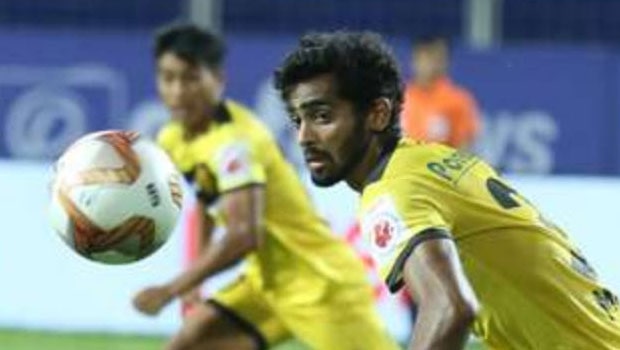 19-year-old youngster Akash Mishra played his debut Hero Indian Super League season for Hyderabad FC. Mishra initially thought he won’t get many opportunities for the club as it was his maiden season and he will need to learn from the senior players. However, as the youngster impressed as a left-back with his performances, he was backed by head coach Manuel Marquez.

Mishra provided one assist for the team whereas he came up with 80 tackles, 48 clearances, and 37 blocks during the seventh edition of the tournament. Furthermore, he made 55 interceptions, which was the third-highest of the season behind Stephen Eze of Jamshedpur FC (60) and Rowllin Borges of Mumbai City FC (57).

However, Hyderabad FC finished in fifth place in the standings after six wins from 20 games and thus narrowly missed the semi-final berth.

“When I joined Hyderabad FC, I thought that there were more senior players who will get the opportunity to play because it was my first season and that I have to learn from them,” the left-back told All Balls on YouTube.

The youngster added: “Everyone advised me to concentrate on my own game. They told me to believe in myself and give my best. Guidance like this really helped me a lot when I joined Hyderabad FC. It motivated me to do well and improve myself this season.”

Mishra heaped praise on Manuel Marquez for giving confidence to the young players. Marquez was able to get the best out of his players in the recently concluded season.

“…He is a very good coach, but also a very nice person. He always gives confidence to young players. If you see Hyderabad FC, we have many young players. I also like that he doesn’t see whether a player is a foreigner or an Indian. Sometimes he chose Indian players over foreigners. That is the best part of him,” he said.

After an impressive run in Hero ISL for Hyderabad FC, Mishra received a call-up for the national squad for two international friendlies against Oman and UAE. Furthermore, the youngster started in both matches. Mishra added that the feeling to represent the country can not be explained in words.

“It’s is a very nice feeling. I think when the national anthem is playing, the feeling that you get on the ground is beyond explanation. I have played for India’s junior sides but now my main goal is to be regularly in the senior national team. I will do whatever I have to do for that, especially improve myself so that I can be a part of the team.”