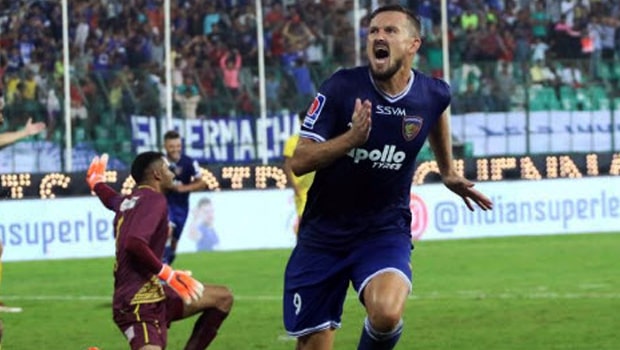 The main reason behind Chennaiyin FC’s struggles last season was their inability to score goals. They finished right at the bottom of the table having scored the least number of goals (16) among all teams during the league stage. Their average of 0.88 goals per match was quite a dismal figure.

As a result, they brought in fresh faces and proven goal scorers from different parts of the world to change things up this season. But, as things stand at the halfway mark, they are headed for another bottom-of-the-table finish. They are placed at second from bottom in the league table at the moment and have scored the least number of goals (5) among all teams as well.

Interestingly, four of those five goals have come from the shooting boots of Nerijus Valskis, their new signing for the 2019/20 season. The Tunisian striker has given his best in all his seven outings so far but he has fallen short on support from his teammates everytime.

His four goals have come in the last three matches for his team which includes a brace against Odisha FC. But two of those matches ended in draws due to indiscipline of Chennaiyin FC’s backline. Valskis had put Chennaiyin in front in each of those two matches.

And in the only match they have won so far, Valskis got support from his teammate Andre Schembri. The latter is the only player other than Valskis to have scored a goal for Chennaiyin this season. So, this goes on to show how support from other players along with Valskis’ exploits could help Chennaiyin in bringing an end to their struggles.

Thoi Singh, Rafael Crivellaro, Dragos Firtulescu and Andre Schembri are the ones who have supplied assists for four of Chennaiyin’s five goals so far. This is another area the other players can contribute in. If they are not being able to score themselves, they should focus more on setting up Valskis for goals. After all, the forward has experience of playing in the high-quality leagues of Belarus, Romania, Poland, Latvia, Thailand and Israel.