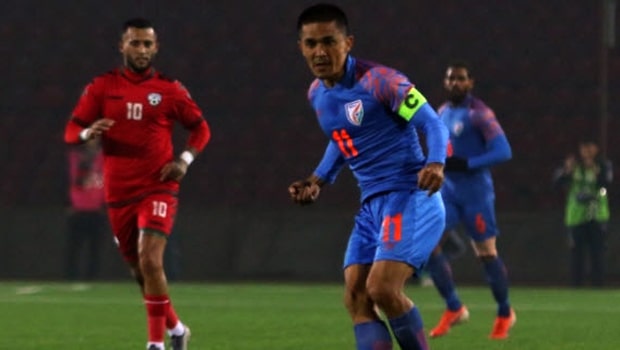 The Blue Tigers of India would have no one but themselves to blame as their FIFA World Cup qualifiers against Afghanistan on Thursday ended in a 1-1 draw in the game played in Dushanbe, Tajikistan.

India had a flurry of chances wastes in a game that became the third consecutive stalemate for the Blue Tigers after holding Asian Champions Qatar to a 0-0 in September and a 1-1 draw with Bangladesh last month.

In a Sub-Zero weather condition and on an artificial pitch, the Blue Tigers conceded in the stoppage time in the first half from a Zelfegar Nazary goal before the first half ended despite having an impressive start to the game.

India had their best chance to equalize with 22 minutes when Chhetri’s free header from the corner in front of an empty Afghan goalpost could only touch the bar and out for a goal kick.

Subsequently, the Blue Tigers resorted to long-range shots that could only ruffle few feathers with the majority of them not hitting the target.

When it was looking like a lost game for Igor Stimac’s men, up stepped Substitute Seminlen Doungel as he placed a header beyond the Afghanistan Goalkeeper from a Brandon Fernandes weighted corner kick with few minutes left in the game.

The goal was well deserved after a series of persistent attacking with purpose in the second half. The result means India have just three points from three games albeit they remain winless in the Qatar 2022 FIFA World Cup and 2023 Asian Cup Qualifiers

Also, they have conceded two goals in three games as much as they have scored with the game against the Qatari the only one where they had a shut out

They now sit in 4th position on the Group E log with 2points above Bangladesh who have just 1 point from four games and 6 points away from Oman who sit second with 9 points although the Blue Tigers would have the opportunity to cut the gap down to 6 points when they travel to Muscat to face Oman in the next game.