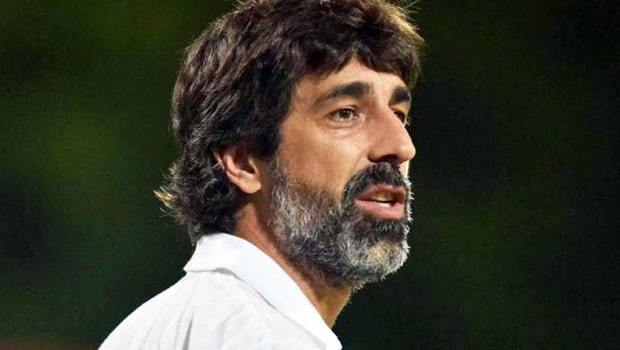 Bangladesh football is in a very uncertain position coming to the SAFF Championships in the Maldives. They have recently sacked their head coach Jamie Day as the Bangladesh FA was not happy with the results. They have appointed former Bashundhara Kings head coach Oscar Bruzon in an interim role. The Spaniard has guided the Kings to two Bangladeshi Premier League titles and now will shoulder the responsibility of delivering the SAFF Championships for the Bangla Tigers.

Bangladesh last won the SAFF Championships back in 2003. So 18 years have passed with the Bangla Tigers making a mark in the SAFF. The closest they came to winning a SAFF title was in 2005 when they lost to India in the finals. Therefore Bruzon will have the responsibility to break the jinx and return the glory for Bangladesh.

Bruzon, who knows Indian football inside mainly due to his time with Sporting Club de Goa, Mumbai FC and later a short stint with Mumbai City feels that the Blue Tigers are clear favourites for this competition.

the national team job is a bit different for the Spaniard and his first assignment is to lead the Bangla Tigers to the SAFF Championships without any practice matches. He only joined the team a week ago but Bruzon is still not very calm and believes that his boys will pull it off. Speaking on his thoughts of why he was chosen as the interim head coach, Bruzon feels that his good record with the Bashundhara Kings may have influenced the Federation to take a call.

“I guess the decision from BFF is a consequence of a successful season at my club, Bashundhara Kings. Our aim is simple – to give continuity and transfer our ideas to the national team,” said Bruzon. “We got full support and encouragement from all the stakeholders. It has helped me to step in with a strong belief that we can complete a good tournament,” he told Khel Now in a recent interaction.

The Spanish tactician is not bothered about the preparations as he believes in his men. He assures the fans of fast attacking gameplay, something which even the fans wanted to see.

“We are trying to adjust to the players, finding solutions to allow them to perform at their best. It is about providing them fresh ideas and tools, challenging them in every training session,”he added.

“We need a fast, effective and solid implementation of our desired game model to get the desired results. In situations where the camp and preparation are short, we can only work on some principles like the speed of the ball circulation, dynamics of the positions and team positioning, game moments, intent of the team transitions, and so on.”

Lastly he highlighted how beating India will be the toughest challenge for them at this tournament as he feels the other teams are evenly matched except the Blue Tigers.

“Right now, all efforts and attention are on our opening game against Sri Lanka,” said Oscar Bruzon. “The FIFA rankings are quite similar for all nations except for India, which is way ahead of the rest. So, we can initially consider India as the favourites to lift the trophy,” he added.