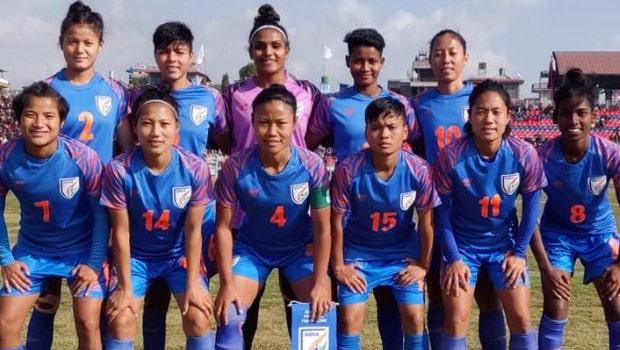 India on monday defeated nepal on their way to their third gold medal in a row.

The team got a 2-0 win in the final of the south asian games. It was a completely comfortable and routine win for india as they are for the third time gold medalists consecutively.

A brace for bala devi who scored one each in either half of the games and thus ending the tournament as top scorer as she found goal five times in four games played in the competition.

The team made its intentions known from the start as they asked all the questions offensively from ratanbala devi as well as sangita basfore as the latter created india’s first big chance of the game but could only blaze right over the bar.

India scored the first goal in the 18th minute of the game as assisted by goalkeeper aditi chauhan who threw a long ball up the field which was latched onto by bala devi who then finished it off coolly.

Throughout the tournament, aditi conceded only a single in five tournament games. India could have made it two just 30 minutes into the game butan headed pass towards sandhiya only for her to be judged offside.

In the second half coach of the side maymol rocky replaced sandhiya with manisha and only moments later, about 11 minutes after the restart, bala scored the second of her brace after a good work from rantabala had put her through. From thereon, it was only going to be india to win as nepal found it difficult to trouble goalkeeper Aditi who was in goal for India who raced to a 2-0 final score.