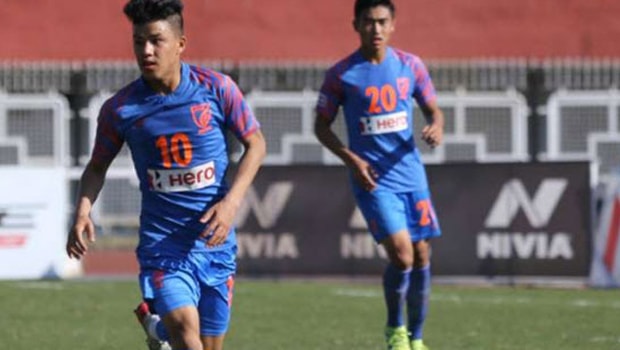 Kerala Blasters are said to want to sign the 17-year-old on an initial 3-year deal, and sources say the team is close to sealing a deal as negotiations are in the final stages.

However, Kerala Blasters’s India Super League rivals, Mumbai City are said to be interested in the teenager’s services.

The player, Givson Singh Moirangthem, played all 16 games for the Indian Arrows team in the I-League last season.

The attacking midfielder contributed four goals having scored twice and making another 2 assists after playing 1,340 minutes in total easily making him one of the Indian Arrows’ most important players.

Newly appointed head coach for Kerala Blasters Kibu Vicuna who was the head coach of I-League winning Mohun Bagan team got impressed by the teenager when his former side and Indian Arrows clashed in January earlier this year in a 1-0 win for Bagan.

Givson Singh Moirangthem began his career with Punjab before joining Arrows in 2016 before joining the India u16 national team to the 2018 AFC u16 championship where India finished in the quarter-final.

Meanwhile, the India Super League is going to get a new commencement date for the 2020-2021 season due to the coronavirus pandemic, but a November date is likely for the league.

The All India Football Federation cannot make a decision on restart of the various football leagues in the country without the go-ahead of the relevant authorities.

However, more playing time is expected for Indian players soon as the All India Football Federation has now implemented the AFC’s 3+1 foreigners rule with immediate effect in the I-League while the India Super League will start its own implementation of the rule in the 2021 season.