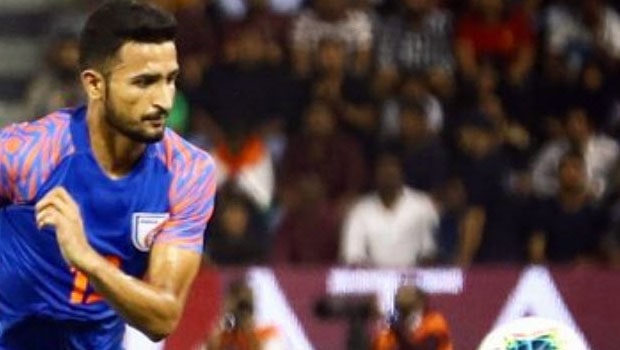 The Indian national team came from behind to hold Oman to a 1-1 draw at the international friendly encounter. Manvir Singh headed the ball home in the second half from Bipin Singh’s cross after Chinglensana Singh, unfortunately, scored an own goal in the first half to hand Oman the lead.

It was a historic match as it saw as many as 10 debutants for India which was happening for the first time in their history. After the match, three debutants, Suresh Singh, Lalengmawia and Ashutosh Mehta spoke regarding the 1-1 draw against Oman.

“The game was very fast-paced. Coach Igor Stimac had told us not to slip for even a second, to remain focused always and to watch our man. I think we executed our coach’s commands well. People say this is the ‘new India.’ It was a great feeling for us to take that responsibility. The goal which we scored came from open play,” Suresh began to open up about his thoughts from the game.

NorthEast United heartthrob and youngest ever captain in the Indian Super League history, Lalengmawia also expressed regarding the intensity of the game and how it was difficult to keep up with their opponent’s tempo. He said, “It was quite difficult because the intensity was very high. The opponents were a strong side. They were exerting a lot of pressure on us and things became more difficult than I had expected. Regardless, it was a good experience.”

However, the thoughts were a little different for Ashutosh as he has been waiting for 12 long years to make his debut for India and finally he achieved that feat against Oman. It’s been a 12-year-long wait for this opportunity. I am really, really delighted to make my debut. It’s every player’s dream to play for the nation and represent its people,” he said.

The 30-year-old revealed how India head coach Igor Stimac gave him confidence ahead of his long-awaited India debut. Just before the game, coach Stimac called me to his room and he gave me a lot of confidence. He told me to have faith in myself and assured me that I have all the characteristics necessary to play at the highest levels, which made me very confident,” he said. The 30-year-old further added, “Oman is a top side, but of course, we wanted to win against them. The boys played with so much personality and character. Of course, there’s always room for improvement. Onwards and upwards from here.”

The NorthEast United right-back was positive when he was quizzed about the next game against UAE as he claimed that the Blue Tigers are not going anywhere without a fight.