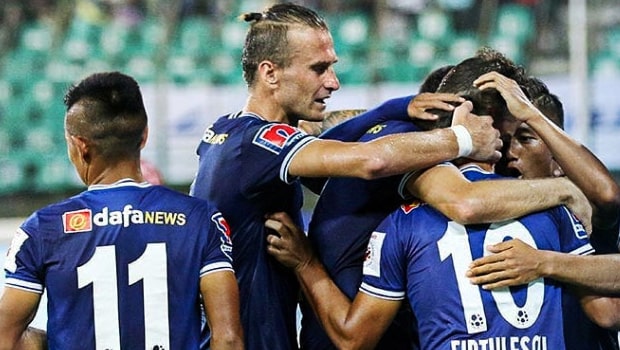 There was a time when Chennaiyin FC’s qualification for the semifinals of the ongoing season of the Indian Super League looked improbable.

They had just two wins from their first 10 matches and hence, were lurking in the bottom half of the table at that point of time.

However, things started changing for them since the match against Hyderabad FC and they are sitting at the fifth spot of the table now with a total of seven wins from the 16 matches they have played so far.

So, Chennaiyin are unbeaten in their last six games having won five and drawn one. Their 3-1 win over ATK at Kolkata on Sunday was also their third away win on the trot and such a splendid run of form has now put them back in contention for a semifinal berth once again.

However, Chennaiyin could snatch that slot away as they have two games left whereas Mumbai has only one to play. And Mumbai’s only remaining match is against Chennaiyin FC which is scheduled to be held at the Mumbai Football Arena on February 21.

So, Chennaiyin could go one step closer to the semifinals when they take Mumbai on in this match. A win here will reduce their four-point difference from Mumbai to a deficit of just one point, and that point would be all Chennaiyin would need in their last League match against NorthEast United to progress into the semifinals on account of a better goal difference.

A loss, or even a draw, in the forthcoming match against Mumbai could bring curtains down on Chennaiyin’s semifinal hopes though. However, they have been in sensational form of late whereas Mumbai would be coming into this match on the back of a 2-5 drubbing at the hands of FC Goa.

Moreover, Chennaiyin have a lot of players who have peaked just at the right time for them. Nerijus Valskis is their top scorer at the moment with 13 goals to his name. He has supplied four assists on top of that as well. Rafael Crivellaro has flourished both in scoring and creative roles. He has seven goals and six assists to his name this season.

Lalrinzuala Chhangte has made his presence felt with four goals whereas Andre Schembri has contributed with five goals and three assists as well. If their contributions aren’t enough, even Anirudh Thapa stepped up in their last game against ATK with two assists to take his season tally to five assists.

So, all these players have struck form when their team needed them the most and in the process have helped Chennaiyin FC to peak at the right time. They have momentum on their side now and thus will be eager book their berth in the semifinals with superlative performances in the remaining couple of matches.