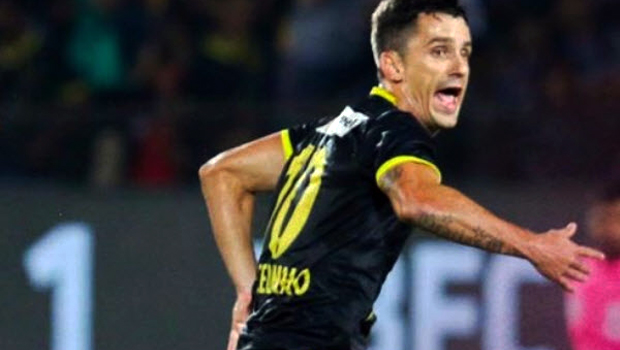 It has been a forgettable debut Indian Super League season for Hyderabad FC. They won just two out of their 18 league matches and finished right at the bottom of the table.

While most of their players looked out of form, one silver lining for them has been identifying a talent like Liston Colaco.

None of the Hyderabad players other than Marcelinho or Bobo looked good enough to score goals in this season but ever since Colaco arrived to this side from FC Goa towards the middle of the season, Hyderabad’s offensive play seemed like having a little more edge.

The likes of Marcelinho and Bobo found support and the result was visible in their last two games of the season as they won one and lost one. Hyderabad ended their season on a high. They defeated NorthEast United FC by a massive 5-1 margin, and Liston Colaco played a massive hand in this game as he scored a brace.

Colaco scored in the 11th and 41st minutes of the match. Both of his goals came as a result of massive defensive blunders by NorthEast United but the positions from which he scored the goals, and the accuracy of the shots, summed up the talent that this 21-year-old has.

A constant goal threat through the night, Liston Colaco bags a brace as well as the Hero of the Match award! 🙌

Colaco, in fact, has risen through the ranks steadily. His talent was noticed for the first time when he finished as the top scorer in the 2016-17 season of the Goa Professional League playing for Salgaocar FC.

FC Goa were quick in identifying the potential in him and he was soon snapped up by the ISL giants. He got to make his ISL debut as a substitute in the 2017-18 season as well but he didn’t get the opportunity to make it to the first team in a star studded FC Goa team.

Then the 2019/20 season happened for him. The first part was equally quiet for him as he kept warming the benches but a midseason move to Hyderabad has turned his fortunes around.

Colaco has been very impressive in his limited number of appearances for Hyderabad this season. He has looked pacey and has the tricks to make the defenders look all at sea against him. Most of his shots are on target too and that’s the hallmark of a good forward.

Hyderabad may have bowed out of this season already but they know that they have a gem in Liston Colaco to work with when they come back next season with a desire to do better.