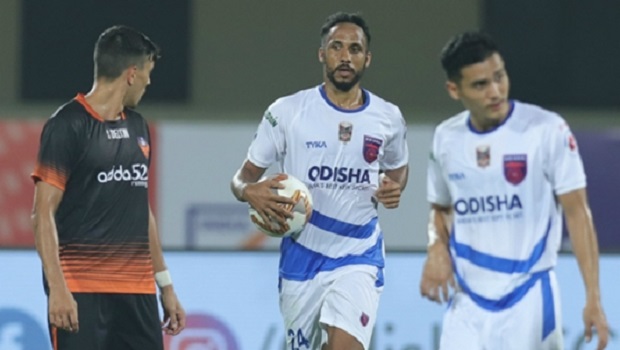 Spanish striker Manuel Onwu was signed up by Bengaluru FC ahead of the 2019/20 season of the Indian Super League. The management had expected good things from the Spaniard, they were looking up to him to boost up Bengaluru’s forward lines which seemed like lacking the penetrative ability since the prior season.

However, Onwu didn’t have anything to show on the scoresheet in six starts for the club towards the initial part of the season. As a result, Bengaluru were forced to drop him to the bench as they looked for alternative scoring resources.

Then came the clash between Bengaluru and Odisha FC on January 22 with the former acing the match by a 4-2 margin at home. A major incident in that match was an injury to Odisha’s star striker Aridane Santana that would bring an end to his season.

But Odisha didn’t make any delay in reacting to Santana’s injury and had roped in an out-of-form Onwu on loan from Bengaluru just a few hours later. The decision received a lot of criticism as many people were sceptical about it.

However, Onwu emerged as a completely different player with Odisha as compared to how he fared during his time with Bengaluru. Odisha didn’t qualify for the semi-finals eventually, which was majorly due to their indiscipline in defence, but Onwu proved to be an even better striker than Santana. By the end of the league stage, he had racked up seven goals and two assists from his 10 outings for the club and it included a hat-trick in their last League game against Kerala Blasters as well.

What helped Onwu to be at the best of his abilities at Odisha was their playing style. By his own admission, Odisha’s playing tactics were much more suited to his game than that of Bengaluru.

“I have always played as a target man and I feel comfortable playing like that. At Odisha, the playing style also suits me, and it makes the most of my abilities. If you see, I have scored all my goals from first touches here and that makes me feel very comfortable. My teammates feed me with the chances inside the box and that is great for a striker like me,” Onwu had said in an interview with Sportskeeda earlier this month.

Bengaluru’s playing style is more compact than Odisha. They like to be tight at the back and only charge forward in numbers during counterattacks. Moreover, their attack is based on build-up play.

Odisha, on the other hand, like to attack at pace. They unfurl a lot of long balls and through passes, and they always try to find their target man at the centre of the field. This type of playing tactics is exactly what helped Onwu to turn his season around. He is a much more confident player now and will look to do even better next season.