Home » Football » Indian Super League » ISL 2019/20: How do the teams stack up in terms of defensive numbers so far? 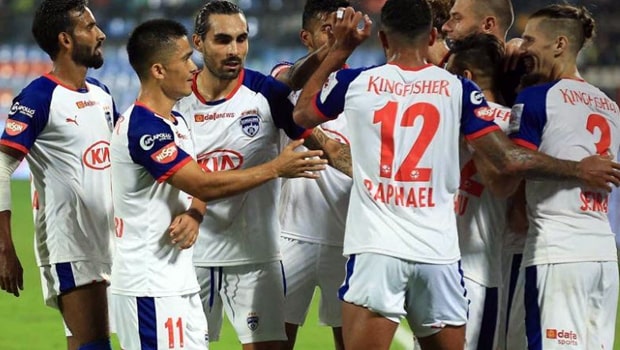 The Indian Super League is steadily progressing towards its halfway stage this season. Each team has played seven matches so far. While some of them have tasted early success, other teams need to step up with their performances to turn their season around. However, the main reason behind the success and failure of each of the teams boils down to how their defensive units have fared so far. A good defensive performance will always help a team to perform decently whereas a bad one can make you lose, even if you are scoring plenty of goals. So let’s take a look at how the teams stack up in terms of their defensive numbers so far.

The defending champions faced a lot of problems with scoring goals at the start of the season. But they kept performing well defensively and now that their scoring form seems to be returning, they are getting to know the importance of their strong defensive show during the times of adversity. Bengaluru are now placed at second in the ISL league table having conceded just two goals in their seven matches so far.

After enduring two poor seasons, the two time champions are back to their best once again. ATK are now placed at the top of the league table having won four, drawn two and lost just a solitary game so far. They have conceded just five goals while scoring 15 (the most by any team this season) and that goes on to tell the impact of a good defensive show along with a strong attacking game.

The Jamshedpur based franchise have been decent with their defensive show as well. They have been conceding a goal per match on average and they are placed at fourth in the league table af the moment. Their defensive numbers coupled with their decent scoring stats should see them through to the semifinals comfortably.

The Gaurs are mainly known for their strong attacking style of play. Although they are yet to deliver their best in terms of scoring this season, they have done decently in terms of defensive numbers. They have conceded just eight goals so far and that sees them quite well placed at third in the table.

The Blasters are currently lagging at eighth in the league table owing to their poor scoring form. They have scored just six goals in their seven matches so far but they have the opportunity to turn it around as they are performing decently in defence. Like Goa, Kerala have also conceded eight goals in their seven games and they can break into the top four too if they can stitch together a couple of victories in the next few games.

After a couple of seasons of disappointment, NorthEast United have started turning their fortunes around since the last season. They reached the semi-finals last time around and are in contention to make it through to that stage this season as well. They are placed at fifth in the league table at the moment and that is mostly due to their decent defensive record (conceded nine goals in seven games).

The new entrants of the ISL this season have equal scoring and defensive stats (scored eight and conceded nine) as NorthEast United but they are placed two places behind at seventh as Odisha have lost two more matches. They have been pretty decent defensively. All they need to do is to perform better in the latter stages of the matches. Late goals against them have cost them most of their games.

Their poor form from last time around has stretched into this season as well. Chennaiyin are placed far down at ninth. They have scored the joint least number of goals this season along with having the third highest tally of goals conceded.

They have been one of the better performing teams in the ISL over the years even though they are yet to win a title. But Mumbai have serious concerns in defence as they have conceded the second most number of goals this season. Such a poor defensive performance has spoilt the efforts of their forwards who have racked up the third most tally of goals for their team this season. Such poor numbers of their backline sees Mumbai City placed at a mediocre sixth position in the table.

They have been the poorest of all teams this season. Not only they have scored the joint least number of goals but have also conceded the most (14) by any team. That sums up why they are placed right at the bottom of the league table.