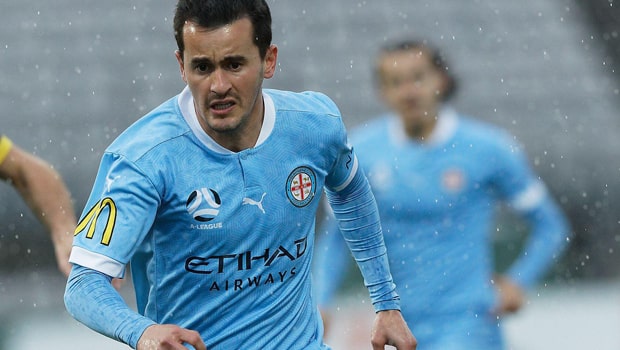 Indian Super League outfit Kerala Blasters snap up their first foreign player for the upcoming season as they signed former Melbourne City star Adrian Luna. The Blasters announced the signing on Thursday late at night and shocked their huge fanbase.

The 29-year-old midfielder who can play on either flank and even as a central attacking midfielder will add a lot of depth and quality to their roster. The crafty Uruguayan midfielder has signed a two-year contract with the Yellow Army and the fans are hoping that he can change their fortunes heading into the next Indian Super League season.

Luna started his career at Uruguayan outfit Defensor Sporting Club. He first played for the U-19 team and then gradually broke into the first team. In 2011 he made his first big move away from his native land as he joined Spanish outfit, Espanyol. He was then loaned out to clubs like Gimnastic, Sabadell and then came back to Uruguay joining Nacional. He has also featured in Mexico plying his trade for clubs like Tiburones Rojos and Venados FC before joining Melbourne City FC in 2019.

He is a player with great experience and the Yellow Army will hope that he can be the player controlling things in midfield for them in the upcoming season.

“Adrian Luna is a player with great calibre, and I am sure that this will make our team stronger. Apart from being a good playmaker and smart operator in tight spaces, I liked that he is a hardworking player who always cares about team performance. So, I would like to welcome Luna to join the Kerala Blasters family,” said Karolis Skinkys, Kerala Blasters’ Sporting Director.

Meanwhile, Luna commented: “Very happy to join Kerala Blasters, the great family with the best fans in the country without a doubt. I am looking forward to training and meeting my teammates and all the technical staff.”

The Yellow Army recently announced their squad for pre-season which will start on June 30th. They have selected a 29 member squad for the preseason and Luna will be added to that team as he lands in India. The Blasters have signed some interesting domestic players in Ruivah Hormipan, Vincy Barretto and Sanjeev Stalin. Their biggest signing till now has to be snapping up Harmanjot Singh Khabra from Bengaluru FC.