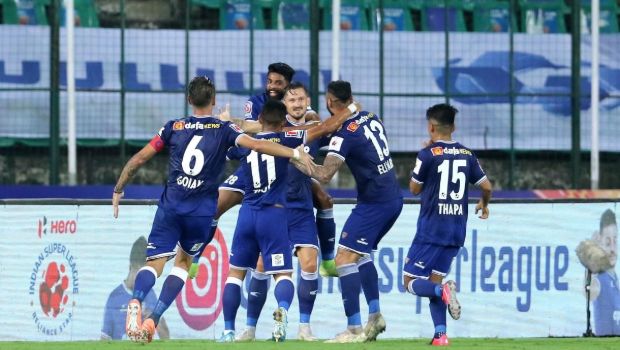 A rampant second-half display from Chennaiyin FC at the Jawaharlal Nehru stadium in Chennai City saw the 2017/2018 Champions of the India Super League record a big win against Goa FC in the first leg of their India Super League playoffs on Saturday.

Chennaiyin scored four times in the second half of the encounter after the first half had ended scoreless. The frenzy started in the 54th minute when Romanian Lucian Goian scored his second goal in his last two games.

Anirudh Thapa made it 2-0 in the 61st minute, and it wasn’t until Sixteen minutes later before Brazilian Eli Sabia made it three-nil to round off the first leg in favor of the home side.

However, there was still time for more when Lallianzuala Chhangte scored in the 79th minute to make it 4-0 while Savior Gama scored a consolation for the away side 6 minutes later.

The Result is Goa’s first loss in five games and its first since a 1-0 loss to Atletico De Kolkota in January. The second leg of the game will come up in Margao on the 7th of March.

The other playoff game will come up between Bengaluru and Atletico De Kolkota on the 1st of March at the Sree Kanteerava Stadium in Bangalore.

Bengaluru will hope to bounce back from their AFC Cup Qualification playoffs ouster against Maziya on Wednesday when they face Atletico De Kolkota who are two-time winners of the Indian Super League.

The Kolkota team won the championship in 2014 and 2016 and are still waiting for their third title. Bengaluru won their first and only title in 2019 and should they beat Atletico De Kolkota, lying in wait will be Chennaiyin who defeated defending champions Goa FC.

However, Goa still have a second leg to try and manage to turn the tie around while Bengaluru and ATK will have their second leg on Sunday the 8th of March. The final will come up on Saturday the 14th of March 2020.