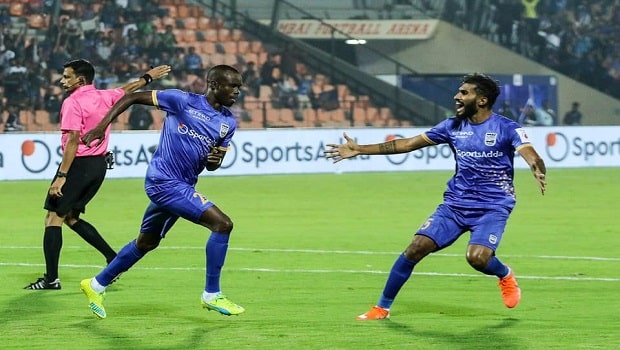 A couple of weeks back, Mumbai City FC were placed in the bottom half of the Indian Super League table having won just one out of their seven games till then. Their chances of a semifinal berth looked bleak as the team not only struggled to defend but also struggled to score, despite having some of the best forwards of the league.

However, three games down the line, they find themselves comfortably placed at the fourth position. That has majorly been possible due to their hat-trick of victories in these matches and one of the main players responsible for such a splendid run of form is the Senegalese striker Modou Sougou.

He has contributed with two goals and one assist during these three matches with both of his goals coming in the last match against Hyderabad FC. Mumbai now have four wins, four draws and two losses to their name so far, and they also have a decent three-point lead over fifth-placed NorthEast United FC.

Sougou’s terrific comeback means a lot to Mumbai City. He was the highest scorer for the side and also the second highest scorer in the league last season with 12 goals to his name in 18 appearances. That sums up how important a player he was to the side last season and that’s why they were struggling initially this time around due to his poor form.

But Sougou brought an end to his poor form when he scored his first goal of the season on Sunday. He netted a ball drilled towards him by Diego Carlos straight into the back of the nets in the sixth minute of the match against Hyderabad FC. But his second goal was more important as it came at a time when Mumbai were reduced to a 10-man team after Sarthak Golui was sent off in the 67th minute of the match.

Hyderabad were trying to take advantage of Mumbai’s shortage of men in the field but the islanders went on a counterattack in the 78th minute of the match and a lobbed pass from Bidyananda Singh towards the right-side of the goal-post saw Sougou chipping the ball over the keeper straight into the nets. Hyderabad could never recover from that jolt and Mumbai City ended up as the winners as a result of that. Sougou would be eager to carry his good form forward into the forthcoming matches now.