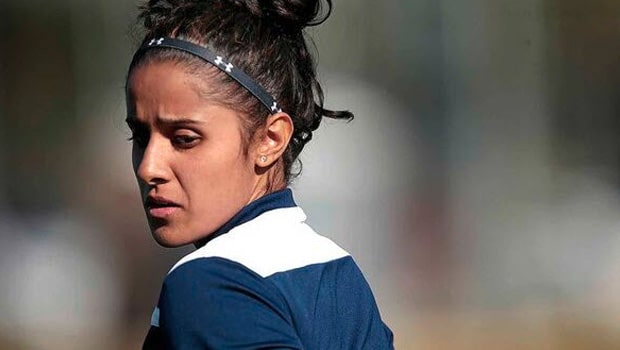 The Indian Women’s team have been playing friendlies all over the globe over the last few weeks. These friendlies come under the preparation for their upcoming AFC Women’s Asian Cup. One of the vital players for the Indian Eves, Dalima Chhibber shared her insights from the team’s preparation on the exposure tour and also opened up on their new coach Thomas Dennerby.

She highlighted how the exposure tour has been great for all the players but mostly for the younger ones. She also pointed out how Dennerby has implemented his philosophy in these matches and the players got gradually accustomed to it.

Dalima who made her debut in 2016 in the South Asian Games has seen Indian football change over the last half of a decade. She feels that the overall opportunity to play for the country has increased along with these exposure tours. She thanked the All India Football Federation for their work in Women’s football. She also pointed out how the team is a lot younger and fitter. She has seen the average age of the team go down rapidly in the last couple of years.

“I feel like a lot has changed, the team is a lot younger and fitter. There is a lot more exposure as we are going to a lot of tournaments. Thanks to the federation that they are giving us these opportunities”.

Dalima is very happy with the overal growth of the team and how the girls have come together and helped out each other on and off the field. She feels that this team can do well at the continental stage can hopefully give a shot at qualifying for the FIFA World Cup.

We now can play tougher opponents and can prepare us for the upcoming Asian Cup. So I feel like the change in coaching philosophy and training the girls are putting everything on the line. As our main goal is to perform well at the Asian Cup and hopefully qualify for the World Cup eventually,” the 24-year-old versatile defender concluded.

It will be interesting to see how the Indian Women’s team perform at the continental showpiece event. With coach Dennerby at helm, things look positive for the Indian ladies.