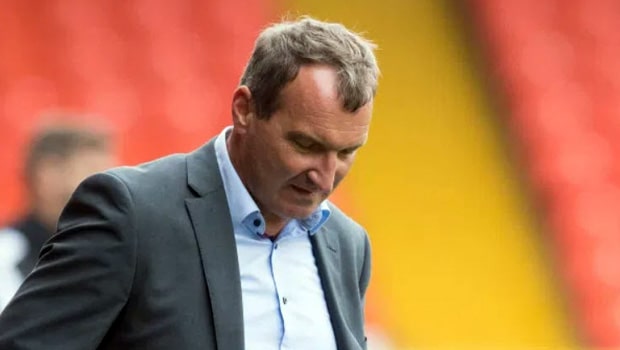 Chennaiyin FC finished the ISL 2020-21 season with a 1-1 draw against Kerala Blasters FC on Sunday even though they were reduced to a 10-man side.

Both goals were scored in the first half with Fatkhulo Fatkhuloev breaking the deadlock and Gary Hooper equalized for the Blasters from a spot kick. The Marina Machans dominated some parts of the game completely but their head coach Csaba Laszlo believes that the draw was a fair result.

“It was a fair result because the first penalty was not a penalty but the second was and it must be given. I think it was compensation. In the last 20 minutes we played with 10 men and the team defended very well,” Laszlo said after the game.

Laszlo also showed huge amount of trust on young midfielder Anirudh Thapa as he handed him the responsibility to lead the side in this game. When he was asked whether Thapa is ready to lead the club and country from next season, Laszlo said, “Yes. It’s a very simple answer, yes”.

The coach also said that there is huge scope for improvement in Indian football. He thinks the scouting system can be better and that can help in unearthing more Indian goalscorers. As far as his team is considered, he is pretty happy to have at least three Indian players who are quite good in front of the goal.

“I can talk for maybe two hours about it. I want to see more Indian players on the pitch also more Indian goal scorers. Also, we need a better scouting system for every team because I’m sure that we have a lot of talented players. We have to talk about it,” Laszlo explained.

“The players need more games, more training sessions and a lot of work should be done in this direction. I don’t see a lot of Indian goal scorers because most of the teams build their squad with foreign players in key positions. Most foreigners decide the games by scoring goals. For this reason, I was happy that we have 2-3 Indian players in the squad who can score goals,” he added.

He also thanked the fans for their constant support and admitted that he failed to produce the results that they desired.

“I miss them (fans) very much. I know they are disappointed. Last season we made the final, this season, we didn’t make the top four. I think we played enjoyable football but were unlucky a lot of times. Most of the draws we played, it was our mistake, our game management or had better chances to win the game. The fans can give us more support and positive energy. If you’re real fans, even in bad times you stayed with us, we will show fighting spirit next season,” he said.

However, he is hopeful about the future and wants to carry on his work with the club and the Indian players.

“We have to talk about it. Today I talked with my wife and said I don’t want to go back as I already miss India. Lovely people, many friends, even in the bubble we grow together. I respect the club’s decision and I want to stay in India. I am 57 now, I had in my career big clubs, I have played Champions League, Europa League qualification, European Championship. I want to give something to Indian football from my experience,” Laszlo signed off.