ISL 2020-21 | Deshorn Brown didn’t start as he has an injury: NorthEast United’s Khalid Jamil after stalemate against Hyderabad FC 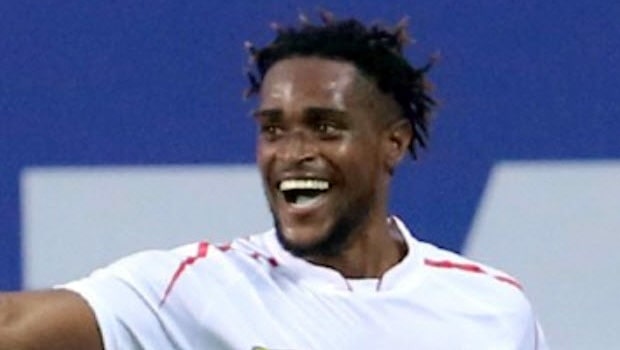 NorthEast United FC held Hyderabad FC to a goalless draw in their Indian Super League clash at the Tilak Maidan in Goa on Sunday.

It was an exciting battle in which both sides tried their best to score but the defences of the respective sides were just too good to let anyone go through them. NorthEast United FC missed the services of their premier striker Deshorn Browne until the 66th minute in the match.

It came as a surprise that he was benched but the Highlanders’ head coach Khalid Jamil revealed that Browne was nursing an injury. He had three stitches on his leg and that’s why Idrissa Sylla started ahead of him.

“Deshorn Brown has an injury. His leg has three stitches from previous matches. And we have Sylla also. He is also a good player, a good striker, so we thought of playing Brown in the second half,” Jamil revealed.

Even though the match ended in a draw, Jamil said that he was quite happy with his team’s overall performance. At the same time, he admitted that three points from this game would have definitely felt better.

“We were always thinking about a positive result. – three points. We tried, we got many chances. And talking about the team, it is a good performance, we played with a good team. They also did a good job. So I am happy to get one point but we would be happier to get three points,” Jamil said after the game.

Jamil was also very impressed by the way two of his defenders, Nim Dorjee and Provat Lakra, combined at the back. He was happy with their midfielders, Lalengmawia and Lalrempuia Fanai, as well.

“It was not difficult because as you see, before two matches, Nim (Dorjee) and (Provat) Lakra had started. They played well. Nim played his third match so we had confidence. He will fulfil the Ashutosh’s (Mehta) role. Even Lakra, he did a good job, this is his second game. (He gave us an) outstanding performance. And talking about (Lalrempuia) Fanai, he also did a good job. Playing with Lalengmawia, he dictated the midfield, his supply was good. His positioning was good. I am so happy.”

NorthEast United FC are now sitting at the fourth spot in the ISL table with 23 points. They play bottom-placed Odisha FC next on February 14.