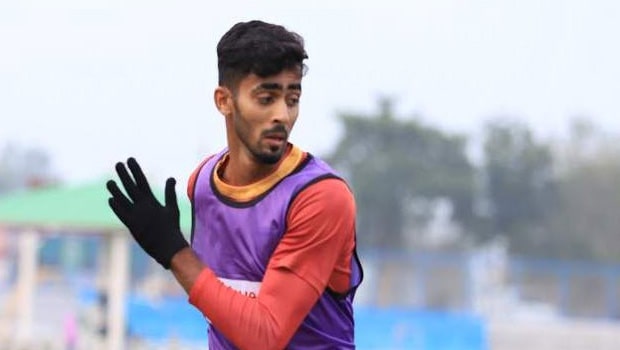 Hyderabad FC head coach Manolo Marquez had said right at the beginning of the ISL 2020-21 season that league debutant Akash Mishra will go on to play for India and will be one of the best left-backs for the country as well.

While there is still a long way to go before the 18-year-old establishes himself as the best left-back in the country, Marquez’s first prediction has come true as Mishra has got his maiden call up into the national Team aftrr a superb ISL season.

“We spoke with him about his first game in the ISL. He is very quiet, has a very good mentality. For me, he will be one of the best left-backs in India soon,” said Marquez.

If current form is taken into account, there is hardly any better left-back in the ISL right now than the Uttar Pradesh-born youngster. Mishra has not only played every minute in this ISL season but he is also ranked second for tackles among defenders. He is second in the list of most interceptions as well and has made 48 clearances along with 37 blocks.

Apart from Mishra, India head coach Igor Stimac has included nine more new faces in the list of 35 probables for the friendlies against Oman and UAE that are scheduled for March 25 and March 29 respectively. Liston Colaco, another Hyderabad FC player, and FC Goa’s Ishan Pandita are two among those new faces who have got their call up after a stellar ISL season.

“We have kept 35 players in the list as a cushion in case any player picks up an injury during the ISL playoffs,” Stimac said.

“It’s been a difficult year for all of us and finally, we are all getting together. It will be great to meet some new young guns and to check how bright our future is with them,” he added.

Stimac also went on to asset the importance of the friendlies against Oman and UAE to the Indian team and how these matches can help them in their preparations for tougher fixtures.

“The two matches against Oman and UAE mean a lot to Indian football. It’s been a while since we last played and this is a great opportunity to check where we stand at the moment,” he continued.

“I know the season was a tough one and players might be overloaded. But, we have enough time to refresh their legs and brains. However, many of them will have a break of two weeks without any organised training sessions prior to joining the camp. Hopefully, they will execute their individual working plans,” he added.

The final list of 28 players is expected to be announced after the ISL final which is scheduled to be played on March 13. India are supposed to assemble in a preparatory camp in Dubai on March 15.