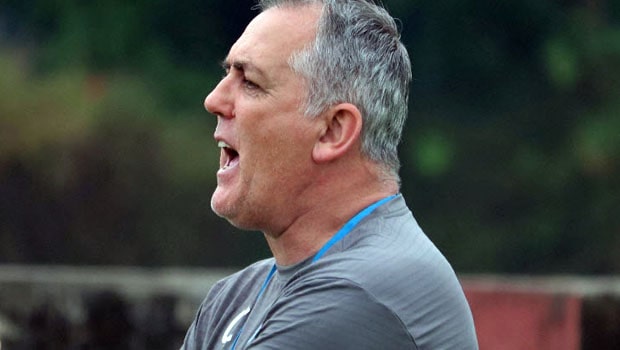 Jamshedpur FC will be eager to get back to winning ways when they lock horns with Kerala Blasters FC on Wednesday. The two sides met 17 days back and Jamshedpur had lost to the yellow army.

However, head coach Owen Coyle feels that the previous result won’t have any effect on the mindset of his players in this game. He thinks his players are capable of turning their fortunes around.

“In the previous game we were in a great condition to win the match but we made some individual errors. That can happen in football. What happened in that game has no relevance to tomorrow’s match. We have to be at our best,” Coyle said on the eve of their match against Kerala Blasters.

Coyle also went on to heap praise on their new acquisitions, Farukh Choudhary and Len Doungel, whom they secured from Mumbai City FC and FC Goa respectively. Both players featured for Jamshedpur in the last match and the head coach said that the duo has made their attack far more potent.

“With Farukh (Chaudhary) and Len Doungel coming in they have added a great dimension to our forward play and that was evident in the Hyderabad game. We want to stay positive. They (Kerala Blasters) are an attack-minded team and they will want the three points. They have the momentum with their unbeaten run. We have to start our unbeaten run. It has started with a draw against Hyderabad and now what we have to do is continue the unbeaten run until the end of the season,” said Coyle.

The gaffer also said that their Australian forward Nicholas Fitzgerald is slowly regaining his full fitness and could get some gametime during the match against the Blasters.

“Nic (Nicholas) Fitzegarld is training very hard. He obviously was injured since the beginning of the season. He came on a couple of games back, so hopefully, he will be involved tomorrow night and it will be nice to see him at his very best.”

Jamshedpur FC are currently sitting at the eighth spot in the table with 14 points to their name. But they are mathematically still in the race for playoffs and Coyle believes anything is possible in the upcoming games.

“What the league has shown is whether you are in position one or position 11, everybody is capable of beating and taking points from each other. We have to make sure we do well. Against Hyderabad, the boys worked really hard. I saw how many additional opportunities we got in the second half. Having done well, we still have to be more offensive and creative and I feel if every personnel is trying hard we are capable of doing that,” signed off the Jamshedpur head coach.