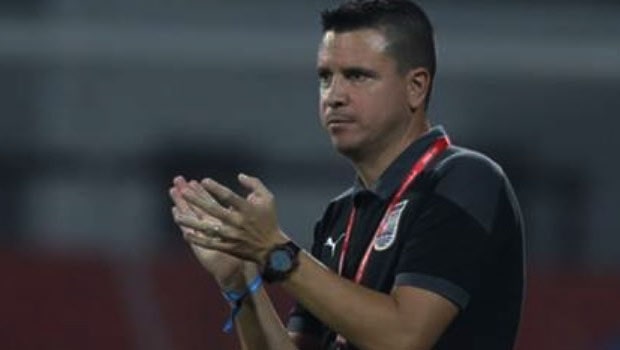 Sergio Lobera didn’t manage to lay his hands on the ISL trophy even though he had an excellent three-year stint with FC Goa. However, he his pretty upbeat about his chances of winning the title with City Football Group-owned Mumbai City FC this time.

He addressed the media on Thursday on the eve of their match against SC East Bengal and said that he would trade any goalscoring record for the silverware.

“The most important thing is to win the trophy,” Lobera said.

“Obviously, this will be a consequence of doing a lot of things well. Along the way, if we have very good numbers in terms of not conceding a lot of goals, scoring goals, possession, these things give you more possibilities to win the league. But if I need to refuse all records and only win the trophy, I prefer to win the trophy because this is the best record we can achieve,” he added.

Mumbai City are currently enjoying the view from the top of the table having accumulated 26 points from their 11 games till now.

A lot of pundits and fans have drawn comparisons between FC Goa under Lobera and the current Mumbai City side under him. But Lobera says it is difficult for him to compare the two sides.

The Spaniard also went on to mention how happy he is with the way his team has been creating scoring chances in this season.

“I’m not worried about our capacity because we are scoring goals enough to get us the best results. It’s always possible to improve but the most important is to create chances and we are creating chances in every game,” he said.

They won the reverse fixture against East Bengal by a 3-0 scoreline but Lobera thinks that it would be a mistake to go into this match with the previous result in mind as the Red and Gold Brigade are on a seven-game unbeaten run (won two, drawn five).

“I feel it would be a mistake if we play tomorrow’s game thinking about our last match against East Bengal. They are a completely different team. They have improved their level a lot. In their last [few] games, you can see that it’s difficult to find spaces in their half and to defend against some of their players.