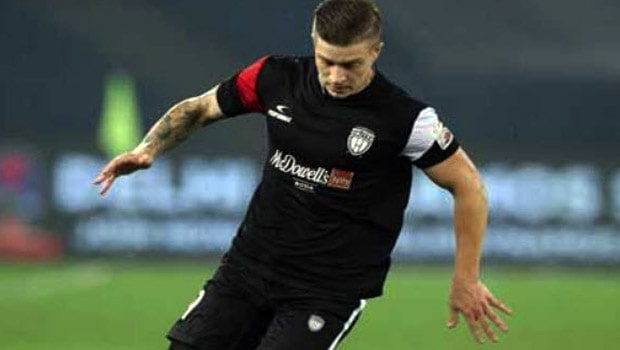 NorthEast United FC have retained the services of Uruguay striker Federico Gallego for another season of the Hero Indian Super League. The 30-year old striker has spent the last two seasons with the NorthEast United FC in which he scored five goals and provided six assists in the 30 matches he played.

Gallego started his football journey with Uruguayan club Institución Atlética Sud América before making his senior debut for the club a decade ago in 2010. Subsequently, he also played for teams like Comunicaciones Fútbol Club in Guatemala and Liverpool FC Montevideo as well as Club Atlético Boston River in Uruguay before joining the Highlanders in the Hero ISL.

Gallego is regarded as one of the best players in the Indian Super League and made a potent combination with his teammate Bartholomew Ogbeche, who had gone on to score 15 goals in the previous season of the tournament.

In the 2018-19 season, Federico Gallego scored four goals and provided five assists and thus played an instrumental role in the success of the NorthEast United FC. The Highlanders had finished the league stage at the fourth place, which was their best ever finish in the tournament.

Meanwhile, the Uruguayan suffered a serious injury in the semi-final leg against eventual 2018-19 winners Bengaluru FC. Subsequently, he played 10 matches in the previous season in which he scored a solitary goal and provided one assist. The Highlanders had a poor last edition as they could secure only two wins from the 18 league stage matches to finish at the ninth place in the points table.

Thus, NorthEast United will be determined to turn the tables in their favour in the upcoming edition of the league under the tutelage of new head coach Gerard Nus. The ISL 2020-21 will begin from November 21.