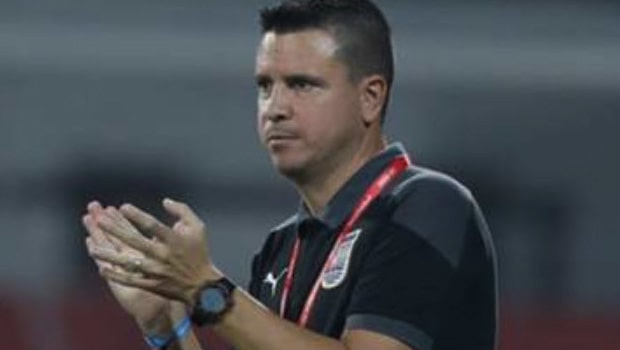 Mumbai City FC will face FC Goa in the second leg of their Semifinal clash after the first leg ended in an entertaining 2-2 draw.

The first leg was filled with controversies and excitement for the fans as both the sides were looking to play attacking football and hence there were goals. However, now Mumbai City FC head coach Sergio Lobera is determined to raise the bar in this match and pass the FC Goa challenge with flying colours.

The Spaniard was not happy with his team’s performance in the first leg as fans expected them to take a sizable lead over the Gaurs as the Islanders were tipped favourites since they bagged the ISL League Winners’ Shield. Lobera felt that his team was not clinical enough and also they did not control the game the way he would have liked them to.

“I am not happy because there are two things that were important for me in the last game. First of all, we had chances to score more goals and we need to be more clinical in such situations. Secondly, I think the game was very open. We didn’t have control of the game during some periods in the game and gave them the opportunity to play between lines, with spaces and I think we need to improve on this,” the head coach said.

Without mincing his words, Lobera addressed how it is not only FC Goa who are facing troubles with injuries, even the Islanders have been hindered by injuries and suspensions. Still, Mumbai City had the upper hand against the Gaurs in both the league matches this season. Lobera said, “I don’t like to cry because I think it’s not good. We also have injuries, we also have suspensions, we also have players playing out of position. I didn’t speak about this all the way, explaining my problems for everyone.”

The Spaniard added, “Obviously, when you are playing with not the full squad and are using some players in some position it would be because the two right-backs can’t play, one player is on suspension, one player is not fully fit, and so on. All of that may have affected our performance. Hopefully, in the second leg we have the full squad, we have all the players available and we can improve in this situation.”

There were also controversies with Mourtada Fall who came up with an infamous two legged tackle to bring down Princeton Rebello. It was a dangerous tackle and a lot of people thought it was worthy of a red card while the referee only handed him a yellow. FC Goa immediately after the match issued an appeal to the All India Football Federation’s (AIFF) disciplinary committee to initiate action against Fall keeping in mind the “safety and well-being of players on the field.” Lobera on the other hand feels that it was unintentional as he also compared a similar incident of FC Goa skipper Edu Bedia.

“Those people are speaking about Fall, saying that he had bad intentions in this tackle are the people who don’t know him. Because Fall is a big person, big player, a very good professional,” the 44-year-old began.

The former Las Palmas manager ended the press conference showering praises on Mourtada Fall who was sensational in their Shield win and also scored a goal in the first leg. Therefore Lobera feels lucky to have the Senegalese by his side.