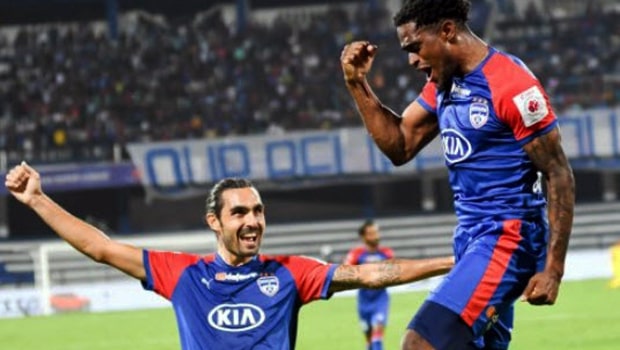 In the 31st minute of the first leg of the second semifinal between defending champions Bengaluru FC and two times champions, ATK, the Jamaican striker Deshorn Brown found the net to give the former an advantage.

Juanan’s primary focus was to place the ball in the left corner of the net but he didn’t add any power to his shot. Arindam Bhattacharja should have gained control of the ball as it was not a difficult safe but he could not grab it in the first attempt and Brown did the rest while following up.

Eleven minutes later, the hosts could have had their second goal of the night as Brown had another shot at the target but it went over the bar. Earlier in the 17th minute of play, Roy Krishna found David Williams with a great assist. Williams was able to go past the Blues goalkeeper Gurpreet Singh Sandhu but it was no avail, as the linesman referee was quick to signal the handball which was Williams’ first touch on the ball.

ATK was the better side in the first half as they catapulted eight shots but it was the Blues who went into the break with a lead. The hosts had to make a force change as striker Kevaughn Frater replaced Albert Serran who injured his leg while trying to clear a ball at the stroke of the half-time.

In the 47th minute of the play, Bengaluru FC skipper Sunil Chhetri had a chance to double the lead after an assist from goal scorer Deshorn Brown. However, ATK goalie Arindam didn’t make the mistake this time around and tipped it over the post.

Frater who had come on as a substitute at the half-time, absolutely smoked one with his left foot in the 75th minute but Arindam was once again on his toes to keep it out. Five minutes later, Chhetri had another chance but he was way off target after an assist by Erik Paartalu.

In the dying minutes of the game, the hosts committed an error as Nishu Kumar was sent off for his challenge on Roy Krishna.

The second leg will take place in Kolkata on 8th of March.