Home » Football » ISL 2020: I am happy with the attitude of my players – Carles Cuadrat after thumping win over Kerala Blasters

ISL 2020: I am happy with the attitude of my players – Carles Cuadrat after thumping win over Kerala Blasters 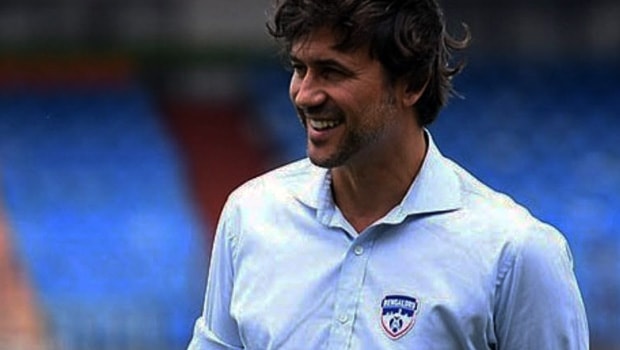 Bengaluru FC came up with a collective team effort as they defeated Kerala Blasters by 4-2 in the 27th match of the ongoing Hero Indian Super League at Fatorda Stadium on Sunday. In fact, Bengaluru FC skipper Sunil Chhetri missed a penalty in the 48th minute and also conceded two goals but the team’s head coach was satisfied with the player’s attitude as they created a lot of chances throughout the game.

Kerala Blasters took the lead in the 17th minute when they made a perfect counter-attack. Gary Hooper was quick to intercept and made a terrific run to set up the assist for Rahul KP. However, Bengaluru made a comeback when Blasters’ Lalruatthara couldn’t clear the ball and Brazilian Cleiton Silva took the advantage.

Subsequently, in the second half Paartalu and Dimas scored in quick succession to give a 3-1 lead to Bengaluru. Blasters were able to get one back in the 61st minute as Murray found the back of the net.

However, Bengaluru FC skipper Sunil Chhetri made up for his earlier mistake and headed the ball into the net in the 65th minute to end Blasters’ hopes of coming back into the match.

“We made quite a few good chances to score. You are not happy when you concede the way we did but I am happy because the boys kept trying and we made many chances in attack. Once 1-1, we were back in the game. Even when we missed the penalty, the team kept working to try to get the three points so I am happy with the attitude of the players,” Cuadrat said at the post-match press conference.

Bengaluru FC are known for their potent defense but they haven’t kept a clean sheet in their last two matches. However, Cuadrat is not concerned by the same.

“We want to get the three points so it’s not about whether we have a clean sheet or not. We have new players who have to get used to the system that we are playing so it’s normal but I think that the progress has been very good,” he said.

Cuadrat also heaped praise on captain Sunil Chhetri for a terrific header. Bengaluru FC are now at the fourth place in the points table and they are yet to be defeated in this season so far. Bengaluru will next face Odisha FC at GMC Stadium, Bambolim on 17th December.