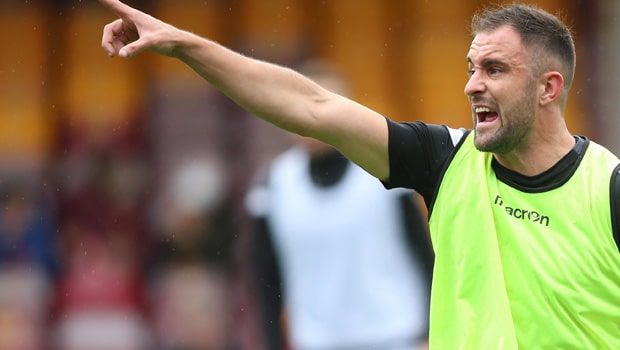 Jamshedpur FC defender Peter Hartley stated that it’s a pleasure to play with India’s Jitendra Singh in the ongoing Hero Indian Super League. The Red Miners secured their second win of the season after they defeated ATK Mohun Bagan by 2-1 at the Athletic Stadium in Bambolim on Monday.

Seiminlen Doungel and Alex Lima scored for Jamshedpur FC in the 37th and 84th minute respectively to give a 2-0 lead to their team. However, Pritam Kotal was able to get one goal back in the 88th minute but Jamshedpur FC were able to bag three crucial points.

“I thought Jitendra was absolutely fantastic today. He covered every blade of grass today like you said and he’s a pleasure to play with. From day one of pre-season, he’s come in, and has really rolled his sleeves up. He’s worked his way into the team this season and he is keeping his spot,” said Hartley, after the win over ATK Mohun Bagan.

On the other hand, Jitendra Singh was awarded the Hero of the match for his fine performance in the midfield. Singh added that it was crucial for them to win three points against a tough opponent after their previous match ended in a draw against Hyderabad FC.

“Even in the last match we tried to take back three points, but that did not happen unfortunately. But, it was important to get three points tonight, against a tough opponent. Now, we are focused on the next match,” stated the Indian player.

The team’s head coach Owen Coyle was delighted with the performance of his team and believes that the team can further improve in upcoming matches.

“Yeah, I’m delighted, I mean, you know the boys, how we play, we give you everything we’ve got. We worked very hard tonight, but as for the quality, I think we can show more as we move forward. But we certainly showed signs and that’s what we need to do. We need to keep improving,” said Coyle, after Monday’s game.

Jamshedpur FC will next lock horns against reigning champions Mumbai City FC at the Jawaharlal Nehru Stadium, in Fatorda, on Thursday.