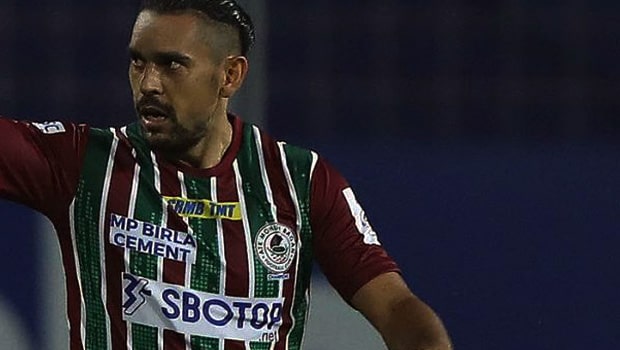 ATK Mohun Bagan forward David Wiliams has stated that they should take this big loss of 5-1 against Mumbai City FC as a learning curve. The previous season runners-up were completely dominated by the defending champions and it was one-way traffic once the match got underway.

The Islanders were able to put their noses in front as they scored thrice in the first half. Subsequently, they scored twice within seven minutes of the second half while ATK Mohun Bagan had to play with only 10 men for most of the last 45 minutes.

Williams, who scored a solitary goal for ATK Mohun Bagan in the 60th minute of the game, admitted that it was a disappointing performance from his team.

“It’s disappointing, I’ve been part of a couple of games that we’ve lost badly. So. it’s all about character building. I mean, there’s a lot of things to work on. I don’t think we’re going to go and work on the five goals conceded,” said Williams, who scored the only goal of the match for ATK Mohun Bagan.

“In training, we just have to know what we’re doing and do it better because we know we’re a good team and we’ve stuck to that, in the last couple of games and last season as well. It’s a bit of a hiccup, it’s a learning curve and hopefully we can get something positive out of that, which probably wasn’t so much football. It’s just about our mindset, our focus and we have to be positive as a group,” he added.

On the other hand, Vikram Pratap Singh was given the opportunity by Des Buckingham to start in the final XI for Mumbai City FC and the youngster was able to grab his chance as he scored a brace in the first half.

Singh said, “I am very happy, because I was waiting for my first start from the last season itself, and I wanted to make sure that I score. I had that belief today and I scored the goals,” said Singh, who won the Hero of the Match award.

Meanwhile, Mumbai City FC had lost their previous match against Hyderabad FC by 3-1. Mourtada Fall, who scored for the team in the 38th minute, added they wanted to make a solid comeback.

“It was a very tough game in the beginning because we took it seriously and we lost our last game. So we lost a little bit of confidence. Of course, it is not easy against  ATK Mohun Bagan, it is a very tough match. And I think we did a good job as a team today. And, in the first half we made it 3-0. I think it was a very good result today for the team. Now we need to keep going and think for the next again,” said Mourtada Fall, during the post-match interview.

ATK Mohun Bagan will next face Jamshedpur FC on Monday at the Athletic Stadium, Bambolim.