Home » Football » ISL 2021: We are playing with a very good attitude – Kibu Vicuna after thrilling win over Bengaluru FC 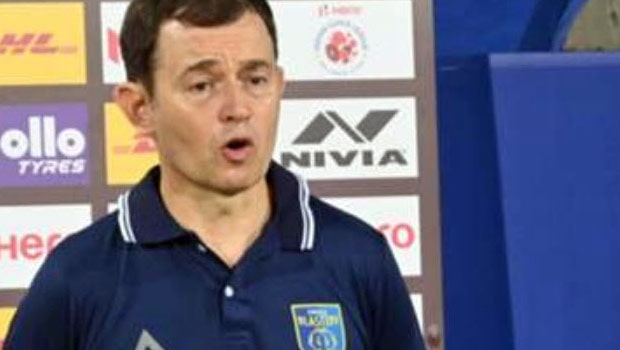 Kerala Blasters won a thrilling match against Bengaluru FC by 2-1 in the 65th match of the Hero Indian Super League at the GMC Stadium, Bambolim on Wednesday. Bengaluru FC took the lead when Cleiton Silva scored a majestic goal in the 24th minute. The Brazilian showed great athleticism to score his fourth goal of the season.

However, Kerala Blasters were able to bounce when substitute Lalthathanga Khawlhring scored in the 74th minute when Gurpreet Singh Sandhu was down on the ground after taking a hard strike on his chest. The winner for Kerala Blasters came in the stoppage time when youngster Rahul KP scored on the counter-attack.

Kerala Blasters head coach Kibu Vicuna was delighted with the performance of his team and lauded the positive attitude of his players.

“The attitude and the commitment of the players is very important. In the last three games, we have been playing with a very good attitude. It was a difficult game because Bengaluru have very good players. The team did well to come back and we are very happy because we got the three points,” he said.

Vicuna praised his team after it made a roaring comeback into the match. “This win is very important because now we have thirteen points. In the last three matches, we have seven points now. Also, the way we came back with this attitude of never giving up makes us believe that we can keep going,” the Spaniard said.

On the other hand, Bengaluru FC interim head coach Naushad Moosa believes his team should have scored more goals given the number of chances they created throughout the game.

Kerala Blasters FC will next face FC Goa at the same venue of GMC Stadium, Bambolim on 23rd January whereas Bengaluru FC will next take on Odisha FC at the Fatorda Stadium on 24th January.