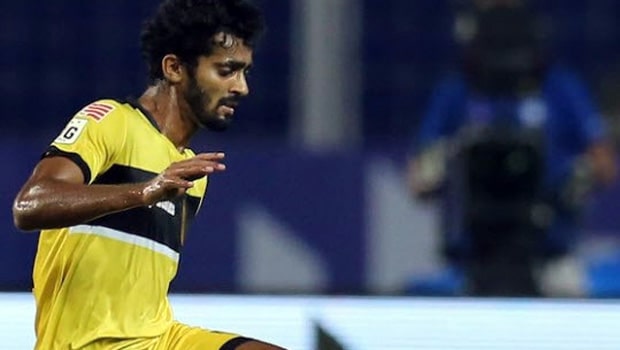 Hyderabad FC has decided to extend the contract of defender Akash Mishra by three years before the ninth season of the Hero Indian Super League, the club announced on Tuesday on their social media platform. The new contract extension will keep Mishra at the club till the end of the 2024-25 season.

Mishra provided one assist for the team whereas he came up with 80 tackles, 48 clearances, and 37 blocks during the 2020-21 edition of the tournament. Subsequently, he played an instrumental role in the success of the club as they went on to win their maiden Hero ISL title after beating Kerala Blasters FC in the final.

As Mishra came up with consistent performances for Hyderabad FC, he was consistently picked by Manuel Marquez in the starting XI. Mishra said it was an easy decision for him to stay at the club as he is emotionally attached to it.

“As a club, we’ve been through a lot in my two seasons here. Even before we became Champions, I have an emotional attachment to the club and it was an easy decision for me to stay,” said the youngster.

Mishra heaped praise on Manuel Marquez, who is known to get the best out of his players. Marquez had led Hyderabad FC to glory in the last season and the Spaniard has all the experience under his belt.

“You don’t have to convince a player to play for Coach Manolo. Anyone who has played under him will tell you how good he is on and off the field. I have learned a lot from him and I hope I can continue learning in the years to come.”

Mishra also talked about the importance of supporters as he added, “The supporters are very important for us as a player or us as a club. Without them, winning the ISL trophy would have felt incomplete. We have seen their support on social media but now it is time to show us the love at Gachibowli. We promise to give it our 100% every time and never disappoint.”

Hyderabad will look to continue the good show in the upcoming season of the Hero ISL.