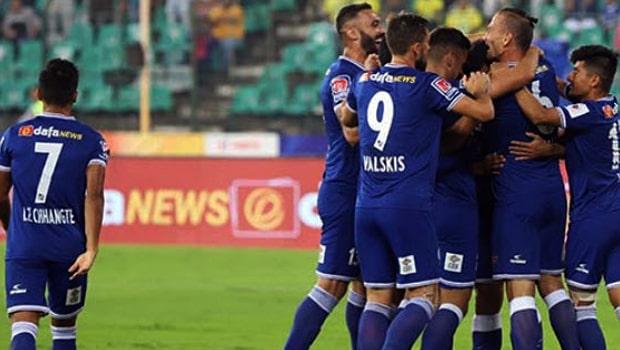 A couple of weeks back, it looked like Chennaiyin FC were heading towards a disappointing end to this season.

They had just two wins from their 10 matches and were lurking in the bottom-half of the league table. The two-time champions had already endured a tough outing last season, and it seemed like it was going to repeat this time around as well.

However, three more matches down the line, they find themselves at the sixth position with five wins to their name in a total of 13 matches. That’s just three points away from the team occupying the fourth position in the table, with five more matches to go.

Comprehensive victories over Hyderabad FC, NorthEast United FC and Jamshedpur FC by 3-1, 2-0 and 4-1 margins have helped them to turn their season around. And the reason for such a sudden change in their fortunes is not the efforts of just one or two players but all-round contributions from the whole team.

Nerijus Valskis and Andre Schembri were the only players who were in form for Chennaiyin during the initial part of the season. There was no such contribution from the other players in the midfield and the defence was performing in a dismal way too. They were leaking multiple goals in almost every match.

But things have changed for the better now. Chennaiyin have conceded only two goals in the last three matches while scoring nine. And that has helped to improve their goal difference by leaps and bounds.

Things have changed in the attacking front too as Valskis and Schembri have got the able company of Rafael Crivellaro and Lalrinzuala Chhangte. While Crivellaro has scored four goals and supplied an equal number of assists so far, Chhangte has contributed with two important goals as well. And it has only added to Valskis and Schembri’s combined season tally of 14 goals and six assists.

In fact, Valskis is the top scorer of this season so far having netted 10 goals in 13 games. He has topped that with three assists as well. Midfielder Anirudh Thapa is another player who has stepped up with his creative abilities. He has supplied two assists so far and has made some key passes in the season as well.

So it seems like things have started to work just at the right time for Chennaiyin this season, and they would be eager to keep this momentum going in order to continue their charge towards the knockout stage.