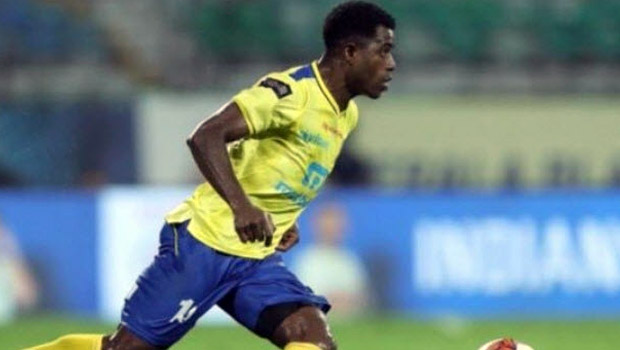 Nigerian forward Bartholomew Ogbeche is close to a move to Mumbai City FC for the 2020-21 India Super League season.

According to the reports, the forward has already informed his teammates at Kerala Blasters of his imminent departure has sent a farewell message to them, wishing them Goodluck.

After moving to India with NorthEast United in the 2018/2019 season, he led the team to their first-ever playoffs in history as their highest goalscorer.

He will now play under Sergio Lobera at Mumbai City. Ogbeche has scored 27 goals in 34 appearances for both NorthEast United and Kerala Blasters.

The former Nigerian international gathered 11 appearances for the Super Eagles scoring 3 goals. He started his club football with Paris Saint-Germain in the French Ligue 1 in 2001.

He then moved to Bastia and Metz on loan, and later, he will move to Spain with Alaves, Valladolid, Cadiz before playing for Middlesbrough in the English Premier League in 2011.

A stint in the Netherlands came for Ogbeche with Cambuur and Willem II between 2014 and 2018.

While Mumbai City finished 5th in the India Super League last season with 26 points from 18 games, Kerala Blasters had 19 points in 7th position.

Atletico De Kolkota ran out winners in the playoffs final against Chennaiyin FC to become the 2019-20 India Super League champions.

The 2020-2021 India Super League season will begin in November in Goa with all matches set to be played behind closed doors.

Meanwhile, Aizawl FC has handed a 1-year extension to Ugandan defender Richard Kasagga with the club making an announcement on Tuesday via its official Twitter handle.

The African made 23 appearances for the club in two years, having joined in 2018 as a free agent.