Home » Football » ISL: Boumous, Crivellaro at the heart of FC Goa & Chennaiyin’s run to the semifinals

ISL: Boumous, Crivellaro at the heart of FC Goa & Chennaiyin’s run to the semifinals 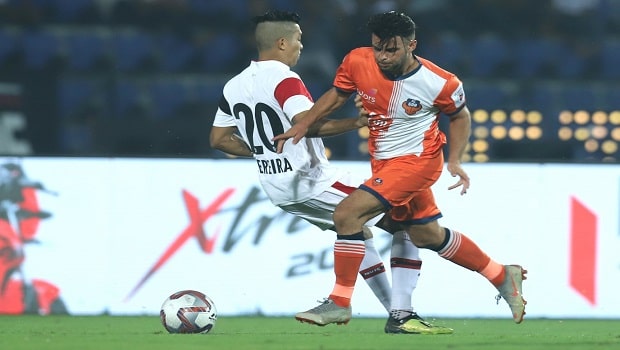 Ferran Corominas and Nerijus Valskis are two names which appear at the top of the list when we look at the top goal-scorers for FC Goa and Chennaiyin FC in this season of the Indian Super League.

The two strikers have been pivotal to the success of their respective clubs with Corominas bagging 14 goals and Valskis scoring just one goal lesser than him. So, the tally of their goals tells us how important their contributions have been during their teams’ run to the semifinals.

However, two players who have played far more important roles than Corominas and Valskis for their respective clubs are none other than Hugo Boumous and Rafael Crivellaro. The two midfielders have been at their lethal best this season both while creating chances and scoring goals. That is evident from their season tally as Boumous has scored 11 goals along with 10 assists for FC Goa whereas Crivellaro has netted seven goals along with supplying six assists for Chennaiyin FC.

In fact, the two players don’t only lead the assists charts for their respective teams but are also the top two players in the most assists list in this season.

Boumous has been a revelation this season for the Gaurs. He performed decently last season as well. He created a lot of chances but wasn’t scoring as often as he has done last season. His goal scoring ability has made him a different beast altogether this time around. In fact, he has performed even better than Corominas this season as he has been involved in 21 goals in total as compared to Corominas’ 17 (14 goals and 3 assissts).

"We are proud to be part of the @TheAFCCL."

Crivellaro, on the other hand, brought life to the Chennaiyin midfield towards the latter stages of the season. In fact, Chennaiyin were not even within the touching distance of the top four after their first 10 games. But everything changed once Crivellaro started to fire.

Valskis was a one-man army until Crivellaro joined him along. Soon, the Chennaiyin midfield, which had looked lifeless for the major part of the season, was all over the opposition defence suddenly.

Crivellaro’s ball distribution ability and vision brought about a new dimension to the Chennaiyin midfield. Not only he started scoring goals but players like Andre Schembri and Lalrinzuala Chhangte started scoring consistently as well. And as things stood towards the end of the season, Chennaiyin had completed their late charge to the semifinals successfully as well, and Crivellaro had a massive contribution in that.

So, Boumous and Crivellaro were the weavers of the fortunes of their respective clubs in the league stage, and they will have an equally important role to play in the semifinals as well.