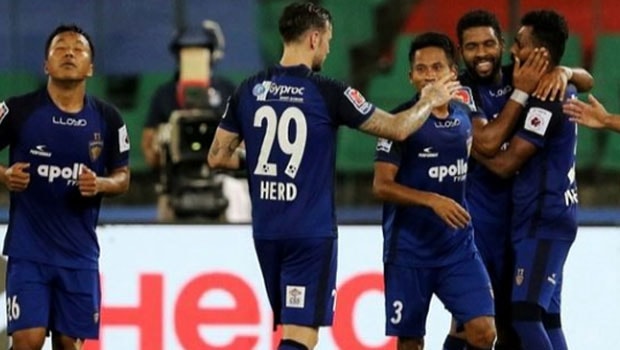 Chennaiyin FC on Friday clinched the last available playoff spot in the Indian Super League when they beat Mumbai City at the D. Y Patil Stadium in Mumbai.

The win meant Chennaiyin leapfrogs Mumbai into 4th after former Mumbai City player, Lucian Goian netted the winner and the game’s only goal in the 83rd minute of the game to break the Mumbai City fans hearts.

The game was with little chances as the first half ended goalless between both sides, but the home side was reduced to ten men in the second half as Sourav Das got red-carded in the 54th minute.

Then with 7 minutes left in the game, Lucian Goian smashed in a volley after Nerijus Valskis flicked on Rafael Crivellaro’s cross from a corner kick.

Chennaiyin FC, with the result, finished the regular ISL League season with 26 points to finish fifth on the log with 30 scored while 24 goals were conceded although they still have a game left.

Their one and the only remaining game will be against NorthEast United on the 25th of February at the Indira Gandhi Athletic Stadium.

Mumbai City, on the other hand, finished 5th with 26 points from 18 games with 25 goals scored and conceded 29 goals.

Goa made the top of the league standings theirs with 39 points from 18 games with 46 goals scored and 23 conceded.

Atletico De Kolkota are second with 6 points behind Goa with 33 points gotten from 17 games played 31 goals scored and 14 goals scored while Bengaluru are in third position 28 points from 17 matches this season, 30 goals scored and 24 conceded.

In other games remaining in the ISL, Bengaluru will play against ATK on the 22nd of February, the next day, Odisha will host Kerala Blasters, and lastly, Chennaiyin will travel to NorthEast United 25th of February.