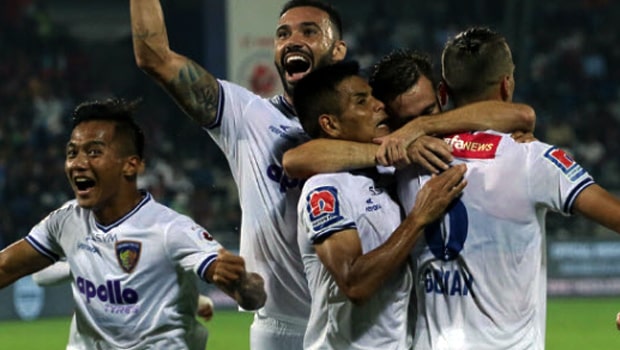 Chennaiyin FC on Tuesday confirmed their place in the playoffs after the team played out a 2-2 NorthEast United.

The away side at the Indira Gandhi Athletic Stadium (Guwahati) were impressive in their last 7 games, winning 6 games and drawing just once.

Unbeaten in 7, Chennaiyin started the game blazing going into the lead in just seventeen minutes through Masih Saighani.

Chennaiyin’s Afghanistan only outfield player in the game, benefited from sloppy defending from the home side as he struck from a throw-in that was not well defended.

However, 5 minutes before the break, Chennaiyin were reduced to ten men as they conceded a penalty.

Defender Tondoba Singh brought down NorthEast United defender Meetei, and the referee didn’t hesitate to show him a red card.

Martin Chaves scored from the resulting penalty in the 43rd minute, the first of his brace as the two sides went into the break leveled on terms.

The restart gave NorthEast United a new lease of life as they dominated their visitors, but they failed to make use of the chances they had without a competent finisher in the team during the game.

Martin Chaves added another goal to give NorthEast United the lead in the 71st minute as they started dreaming of their first win since December 2019.

However, Lallianzuala Chhangte scored late into the stoppage time to ensure that Chennaiyin keeps its unbeaten run and extend it to 8-game.

NorthEast United ended the season with fourteen points in ninth position while Chennaiyin locked down fourth on the log with Twenty Nine points to secure one of the four playoff spots.

In the playoff, Chennaiyin will face Goa FC while Atletico De Kolkota will face Bengaluru in the second playoff.