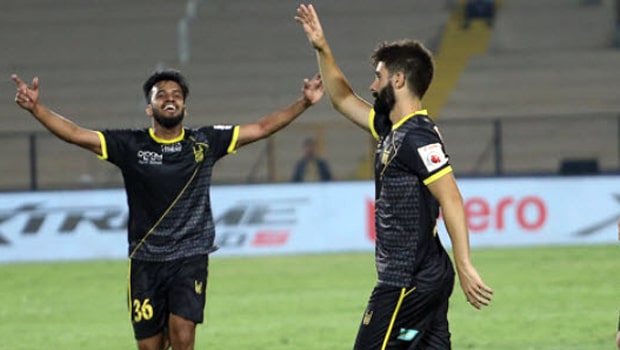 Indian Super League sides Jamshedpur and Hyderabad continued their shambolic run of form as both teams played out a 1-1 draw at the G. M. C. Balayagi Athletics Stadium in Hyderabad on Thursday.

Before an eventful 3-3 draw with NorthEast United on the 10th of February, Jamshedpur had lost to Chennaiyin, ATK, and Mumbai City.

Hyderabad’s only point in the last four games came in a 1-1 draw with Mumbai City on the 24th of January as they lost to Goa, Bengaluru, and Odisha FC.

The game started brightly for the home side as Nestor Gordillo scored the opener in the 39th minute to take the home team into the break with a lead.

The second half was silent but became filled with fouls towards the end of the game as Hyderabad struggled to keep their lead and get their first win in 14 games.

Three yellow cards were shown to Hyderaba’s Marcelinho, Halder, and Stankovic in the last 8 minutes of the game before Sumeet Passi broke the home fans’ hearts with a stoppage-time goal to share the spoils.

In the I-league, East Bengal and Punjab played out a 1-1 draw at the Barasat Stadium in Kolkota. Ansumana Kromah gave East Bengal the lead in the 9th minute.

Mahesh Girik Khosla then equalised for Punjab five minutes before the break, but the second half produced no goal as there was no separating the two sides.