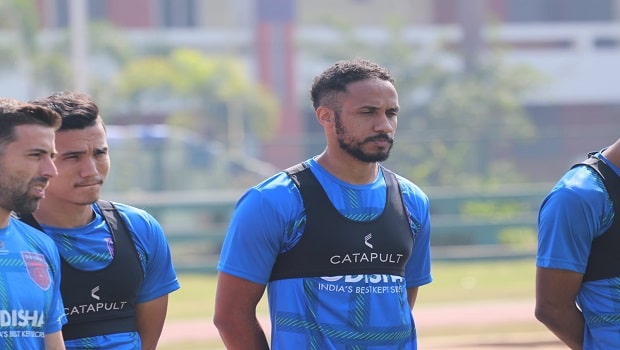 Fans at the Jawaharlal Nehru Stadium in New Delhi on Sunday afternoon were entertained to a thrilling 4-4 draw in the India Super League Clash between Odisha and Kerala Blasters.

Both teams came into the game in high morale after winning their respective previous games.

Odisha at home had beaten NorthEast United by 2-1 on the 14th February through goals from Manuel Onwu and Martin Perez despite Martin Chaves’s initial opener.

For Kerala Blasters, it was a similar 2-1 over Bengaluru as a Bartholomew Ogbeche’s brace ensured that Deshorn Brown’s first-half strike was nullified.

On Sunday, Manuel Onwu and Martin Perez were extremely influential for the home side as the former scored a hattrick.

And it was the Spaniard who opened the scoring as early as the first minute of the game with a goal from a Jerry Mawihmingthanga assist.

However, five minutes later the scores were level as Narayan Das scored an own goal and the away side took the initiative and led in the 28th minute as Cameroonian Defender Raphael Bouli scored his 8th goal of the season.

Manuel Onwu completed his brace 8 minutes later, and Argentine Martin Perez scooped in a penalty in the 44th minute to take Odisha into the break with the lead.

Six minutes into the restart, the ever lively Manuel Onwu got his hattrick completed and set the home side for what would have been their second win in 5 games.

However, Odisha got reckless in defending in the last few minutes of the game as Kerala Blasters were awarded two late penalties with Bartholomew Ogbeche converting both spot-kicks.

The first of the set of penalties came in the 82nd minute while the second came in the 94th minute as the Nigerian converted to break the hearts of home fans.

The result means that Odisha are 6th with 25 points from 18 games and Kerala are in 7th with 19 points from the same number of games.