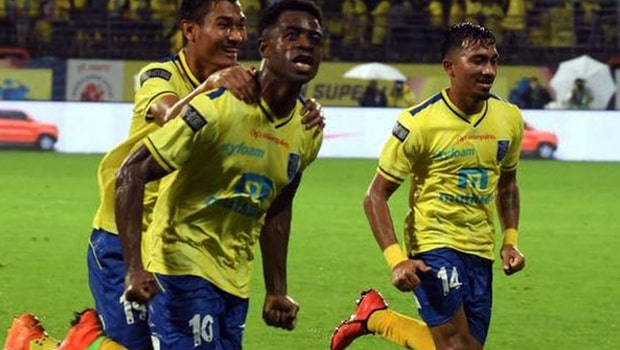 Bartholomew Ogbeche was one of the star strikers in the last season of the Indian Super League. He ended up as the joint second highest goal-scorer with 12 goals to his name in 18 outings for NorthEast United FC. In fact, he had two assists to his name as well on top of the dozen of goals he scored.

Ogbeche began this season in a similar manner too as he helped Kerala Blasters FC, his new team, to victory in their tournament opener against ATK FC with a brace. However, he endured a poor run of form after that and a brief layoff due to injury made him miss out on two matches as well.

He blanked in five back-to-back matches after his double-strike in the first match of this season against ATK. His failure to score had a deep impact on Kerala’s performances as well. They hadn’t won a match after their opening day win against the Kolkata-based franchise.

But it seems like things have started changing for the better since the last three matches. The Blasters have accumulated four points as a result of one win and one draw during the stretch of these three games. And one of the main reasons behind their improved performance has been Ogbeche’s return to form.

The 35-year-old Nigerian striker has scored four times in the last three matches. He scored one each against Chennaiyin FC and NorthEast United FC and delivered his best performance of the season so far with a brace against Hyderabad FC on Sunday.

Such a performance helped Kerala to register a thumping 5-1 victory in front of their home crowd. Ogbeche scored both of Kerala’s first and last goals in the match and looked quite energetic for the entire duration of 90 minutes.

In fact, it has been Ogbeche’s endurance that has been his biggest strength always. He doesn’t give the opposition defenders any time to catch their breath. He has the ability to make them pay for even one mistake as he can track moves shaping up very early. His vision and positioning inside the box make him an even bigger threat and he is one of the best in the league in terms of aerial ability as well.

Kerala now have seven matches left in the season and there couldn’t have been a better time for their star-striker to return to form. Ogbeche will also be eager to carry this momentum forward. He has already scored half of the number of goals he netted last season and now, his aim would be to take a shot at bettering his last season’s tally as well.