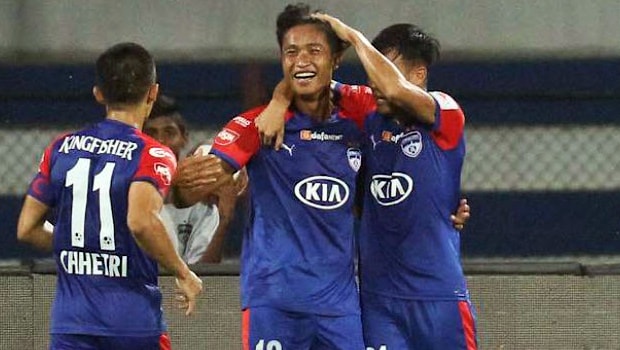 Bengaluru FC forward Thongkhosiem Semboi Haokip has signed a one year contract extension with his club. Haokip last played for his club in a 2-2 draw with eventual Indian Super League winner ATK in the third week of February. The forward had suffered a hamstring injury in that match and he was replaced by Nilli Francisco.

On the other hand, Semboi Haokip didn’t have the best of the seasons for the club as he could only find the back of the net on a solitary occasion in the 14 matches of the season he played. Haokip’s one goal of the season had come in 3-0 win over Chennaiyin FC.

He's here to stay! Striker Semboi Haokip has signed a one-year extension to his contract that will keep him with the Blues until the end of the 2020-2021 campaign. 🔵🔥#Semboi2021 #WeAreBFC #RoomForMore pic.twitter.com/55uXPXwMuP

The Indian footballer had begun his professional debut for Pune FC in the I-League. He then moved to Kerala Blasters in 2016 and then moved to East Bengal in 2016-17 season. The forward had joined Bengaluru FC back in 2017.

Haokip has thus far played 19 matches for Bengaluru FC and he has scored six goals. The forward has played 30 matches in the ISL but all of his six goals have come while playing for Bengaluru FC. The Carles Cuadret’s team had finished at the third position in the league stages after eight wins from 18 matches with a total of 30 points.