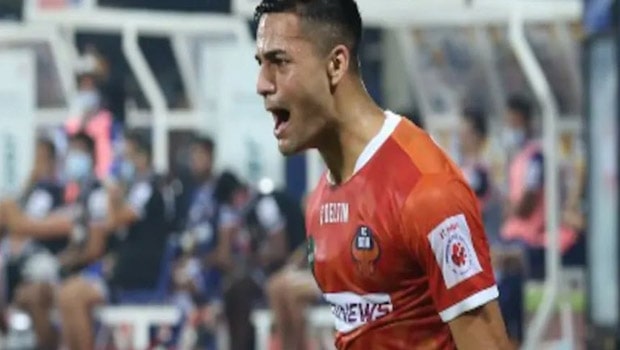 FC Goa’s talented young striker Ishan Pandita has impressed with his skills. Pandita has shown the skills to go a long way in his career and he has done a fine job for FC Goa in the Hero Indian Super League 2020-21 season and played a key role in taking the club to the semi-final stages.

The 22-year old scored four goals in 11 matches for the Gaurs in the seventh season of Hero ISL. Thus, this impressive performance helped him break into the national side for the friendlies against Oman and UAE. Subsequently, the youngster also played for FC Goa in the AFC Champions League.

Pandita feels a striker must also contribute in defending in modern football. Meanwhile, Pandita acknowledged that it was a great learning experience for him while playing in the AFC Champions League and International friendlies.

“It was quite a learning experience. In modern-day football, a striker also needs to help his team by defending as and when required.

“As a striker, you just can’t wait for the ball to come to you – you need to stay involved throughout. It was my taste of international football and that too against such tough oppositions like Oman and the UAE,” Pandita shared his India experience in an interview to footballmonk.com.

“Yes, it will. The AFC Champions League was a fantastic experience. To play at the highest level in Asia was a great platform for me. It enabled me to rub shoulders against the best in Asia and get enlightened as a player. Playing such matches helps and improves yourself as a player,” he said.

Meanwhile, Pandita has received the opportunity to play under Juan Ferrando and India’s national coach Igor Stimac. The youngster believes both the coaches are always looking to develop and help the players.

“I think it’s too early for me to compare the styles and systems of both the coaches as I haven’t spent as much time with Igor Stimac as much I have with Juan Ferrando.

“I can say both are very good coaches and are always looking to help and develop the players. Most importantly, they are great human beings too,” he said.

India will play Qatar on June 3.