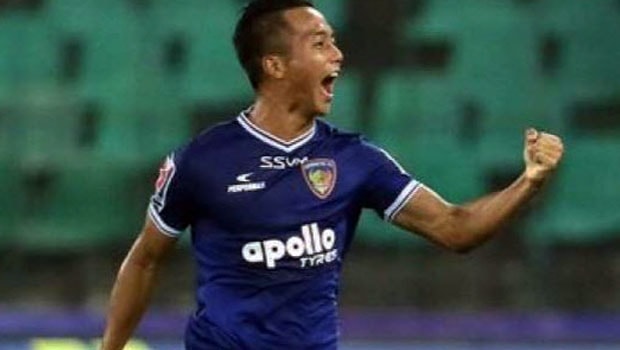 Chennaiyin FC forward Lallianzuala Chhangte has disclosed that India national football team captain, Sunil Chhetri as the best footballer he has played with.

The 22-year-old had the opportunity to play alongside the Blue Tigers’ record appearance holder and record goalscorer when he made his international debut in 2015.

It was in a SAFF Suzuki championship game in 2015 against Nepal that the former NorthEast United player played his first national team game and he announced his arrival with a brace.

According to him, the skipper was instrumental to his brilliant performance as he motivated him and helped ease the pressure he felt.

“I was a bit nervous playing alongside the legend, Sunil-bhai. He’s the best who I have played with until now. I was just a kid at that time. He probably realised that and called me when I replaced Sanju-bhai (Pradhan) at half-time. He kept his hand on my shoulder and that took the pressure off me,” Chhangte explained in a live Facebook session.

Lallianzuala’s goals in the eventual 4-1 win against Nepal in December 2015 made him the third youngest player to score for India in an international match behind the duo of Jerry Zirsanga and Bhaichung Bhutia.

Despite the spectacular start to life for the national team Lallianzuala had to wait longer than expected before he got his first for the Blue Tigers against Bangladesh in the next edition of the SAFF Suzuki Championship.

Under the current national team coach, Igor Stimac the forward has managed to get into the team consistently although he admits that competition is now tougher in the team.

”It’s (the competition) a steep one and honestly, it’s getting tougher every day. But, this is good, as it pushes and motivates me to become a better player.” Lallianzuala Chhangte was quoted on Khelnow.