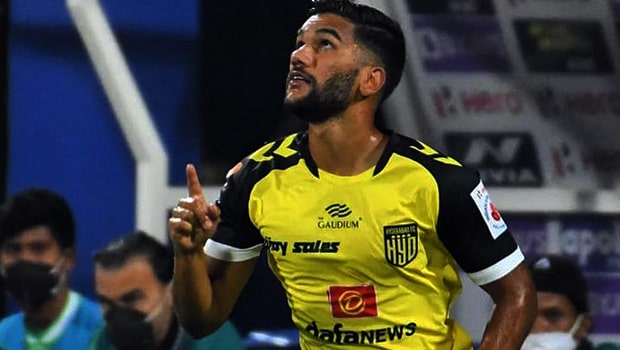 Sahil Tavora has etched his name in Indian football history as he scored the equalizer for Hyderabad FC last season in the finals. The goal helped the Nizams come back in the game as they ended the proceedings 1-1 before winning the trophy on penalties. Tavora’s strike was exceptional especially when the chips were down he came up with a very fluent strike.

Tavora has praised head coach Manolo Marquez for the atmosphere in and around the camp as he shares how the players are one closely knit unit who like to have fun. He feels that helps the Nizams on the field as they have a lot of camaraderie among themselves.

“Hyderabad is different from other teams because it has a family feel to it. We all are friends, we have fun and we eat together. We built on this and I believe this helped us to achieve what we have achieved,” Tavora told in an interview with IFTWC.

The 27-year-old has hailed Marquez’s leadership skills as he feels that the Spaniard likes to keep it simple and therefore it allows the players to express themselves and grow under his helm. Marquez understands a team’s strengths and likes to play along those lines.

“Manolo is an incredible man-manager. He has good relations with the team members and is friendly. He is demanding and urges us to give our best and work hard as a team. Many players have improved under him. Manolo encourages us to play to our strengths and he keeps things simple. It is why many of us are happy and playing our best,” Tavora highlighted.

Lastly when asked about the historic goal last season, Tavora felt special as it is definitely one of his career highlights till now. He shared how things just worked in his favour and it led to Hyderabad FC winning the trophy which made it even more special.

“It is a special goal, an unforgettable moment. Had I scored in any other match, I would have been very happy but scoring in the final, in Goa, in a stadium I have fond memories of, and in the match that led to our first ISL trophy made it all more special and a night I would never forget,” Tavora concluded.

Hyderabad FC recently suffered their first defeat of the season as they were narrowly beaten by Kerala Blasters. The Nizams still have the top spot but they do have areas to improve. Manolo Marquez and his men will travel to Kolkata to face ATK Mohun Bagan in their next match and considering the form the Mariners are in, Hyderabad FC will look to take advantage. It will be a very exciting clash for sure.