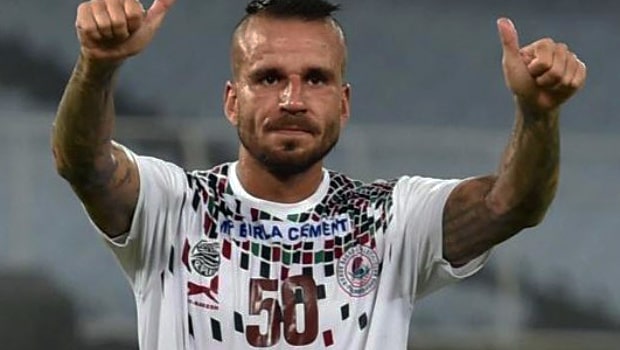 Mohun Bagan were in impressive form as they beat Gokulam Kerala 2-1 on Monday in the I-League despite ending the game with ten men. Hosts Mohun Bagan who have won once, drawn once and lost the other went into the game headstrong and took the lead through a spot-kick as Ubaid, Gokulam Kerala’s goalkeeper hacked Ashutosh Mehra, and Fran Gonzalez made no mistake in the 24th minute.

Just before the break when Mohun Bagan thought they would go into the break with a lead, another penalty was awarded but this time in favor of Gokulam and they duly scored through Captain Marcus Joseph after Nathaniel Garcia was hacked down.

Bagan’s search for the lead did not stay long as three minutes after the restart, skipper of Mohun Bagan Franz Gonzalez scored his brace after heading home from a corner. From there on Gokulam rallied back in a bid to find a way back but Bagan was strong and organized defensively.

Gokulam went close with 25 minutes left as Henry Kisekka’s low cross was tipped away by the goalkeeper of the home side, but Mohammed Salah could not place the ball at the back of the net. However, the team thought it had found its long-awaited equalizer as Kisekka as he mopped up Sankar Roy’s mess into the back of the net in the 88th minute.

Unfortunately, the referee waved it off for offside, and the team went for broke against the Mohun Bagan defence only to be denied by Sankar Roy who tipped away Marcus Joseph shot over the bar. After that, just seconds before the end of the game captain of Mohun Bagan Gurjinder Kumar was sent off and thus unavailable for the derby up next for the Bengal side against East Bengal.

With the result, Mohun Bagan are now in second place while Gokulam moved downward to fifth on the log.