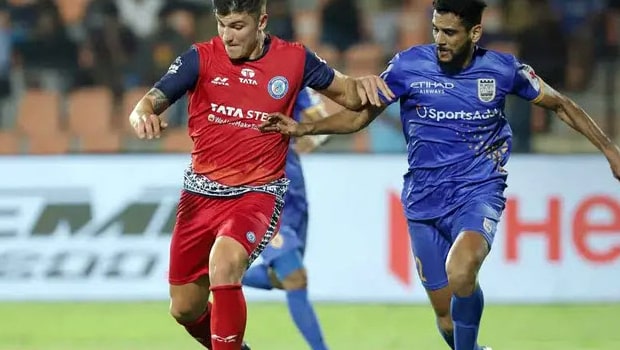 Mumbai City on Thursday made it three wins in four games after beating Jamshedpur 2-1 at the D. Y Patil Stadium in Mumbai in an Indian Super League Clash.

The team had to dig deep to get the desired result and ensured that their four-game unbeaten streak that includes a draw and three wins continues.

It was a comeback from behind as the visitors took the lead in the first half after a penalty in the 7th minute was put to bed by Spaniard Noe Acosta.

Despite having nine attempts in the first half with five of them on target Mumbai City could not get a goal to equalize in the first half and the Jamshedpur went into the break with a mindset that they could be on course for a win.

However, tides turned quickly as the home team equalized in the second half just on the stroke of an hour via Tunisian Amine Chemiti’s strike.

Despite being dominant in the second half also with another nine shots and six on target, Mumbai City found it hard to break down the visitors who held on tight in a bid to end their losing streak which before the game was two losses on a bounce.

It, however, became three straight losses and the fourth in five games as Pratik Chowdhary assisted Bidyananda Singh who scored the winner at the death.

Singh who was a second-half substitute for Sourav Das scored in the 92nd minute to send home fans into a frenzy.

The win means that Mumbai city are now fourth on the log with 26 points from 16 games, 7 points away from the team at the top of the Indian Super League table, Goa FC who have 33 points.

Jamshedpur on the other are 7th with 16 points from 15 games played so far.