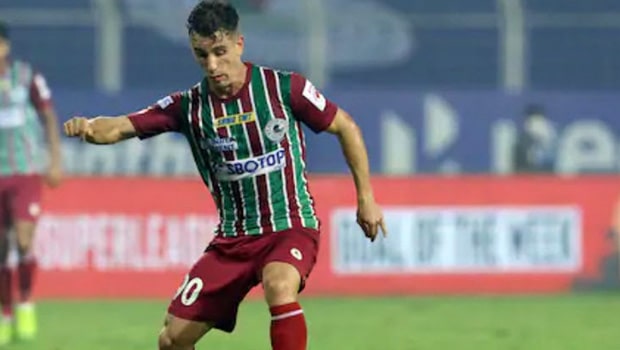 Brazilian forward Marcelinho has given us innumerable memorable moments in Indian Super League history. From scoring picture-perfect free kicks to winning matches single-handedly, he has done it all. The ISL trophy, though, has always eluded him.

However, with ATK Mohun Bagan, he has a real shot of winning the title now. Even though Antonio Habas’ men missed out on winning the Shield by the barest of margins, there are just two more games between them and the Trophy now. Going by their record in knockout matches, Marcelinho has a real good chance of laying his hands on the covered trophy for the first time.

The 33-year-old didn’t have a good first half of the season as he just warmed the bench at Odisha FC. However, once he worked his way out of the club to ATK Mohun Bagan during the January transfer window, his impact has been excellent.

“Here, it’s easy because of the way they play,” Marcelinho said.

“There is a winning mentality and an opportunity to play good football. Everything is connected well in this team. There is quality in all the departments and we try to be compact.”

Marcelinho also credited his teammates at ATKMB for being so supportive and he also said that knowing Habas for a long time also helped him.

“The likes of (Roy) Krishna, and (David) Williams, they are not only good players but good people,” he said.

“On the field, everything’s too easy with them. They know where I’m running. When you have players like that playing with you, your job becomes easier.

“He knew me when I was in Delhi. When I was in Hyderabad, he tried to call me to his team. He put a lot of confidence in me and it is this confidence that makes me comfortable.

“In Odisha, everything I did, the coach questioned. I think, when the coach trusts a player, he leaves the player to do what he wants to do. Here, the coach makes me feel really special.”