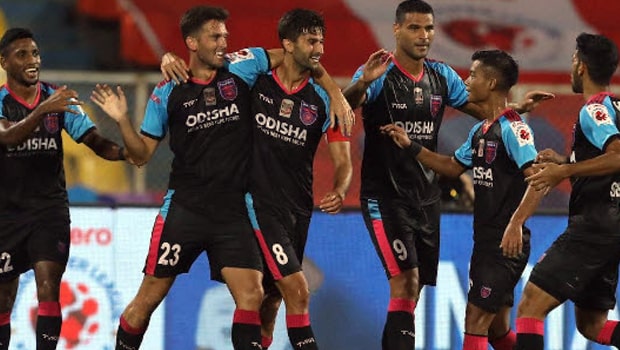 The home side has not lost to Chennaiyin since 2015 and went into the game on a good run of form of two wins in a row.

Also in five games, Odisha won three and lost two, and they have also won their last three home games at home beating Hyderabad and Jamshedpur before Chennaiyin’s visit on Monday.

The away side on their part has not had it rosy in recent times winning just once in their last five including two draws and two losses.

In fact, the team has lost four of Its last five away games drawing the other one against Jamshedpur in a 1-1 draw away from home.

The search for their first away victory in the league in two years looked discouraging as Nerijus Valkis lost a first-half penalty in the 25th minute.

Chennaiyin were made to pay for the miss as they conceded 12 minutes later with Jerry Mawihmingthanga’s opener.

Moments later, it was 2-0 in favour of the home side as Vinit Rai doubled the advantage from a Marcos Tebar’s assist.

The second half of the game saw no goals as the game ended in another victory for the home side.

With the win, Odisha are fifth with fifteen points from 11 games having scored 15 and conceded the same number as well. They are six points away from table-toppers ATK who have 21 points so far.

For Chennaiyin, they sit close to the bottom, ninth position to be precise on the ten-team league table. They have 9 points so far from ten games after conceding 26 and scoring 11.

Mumbai City is Odisha’s next opponents at home while Chennaiyin travels to Hyderabad.