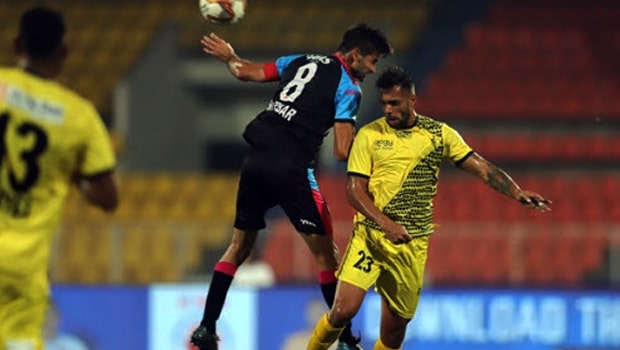 Indian Super League side Odisha FC were 3-2 winners over Hyderabad FC despite finishing most of the second half with ten men after a red card to Vinit Rai threatened to change the complexity and end result
of the game.

The result ended a four-game winless streak for Odisha in the league, and it was from the first half that the signs were showing for Odisha FC after Carlos Delgado and Xisco Hernandez first-half strikes gave the team a comfortable lead but things took a drastic turnaround when Bobo stroked home a penalty after Vinit Rai was sent for early showers.

Rohit Kumar and Guedes came in as second-half substitutes and added to both teams’ score, but it all ended in favour of Odisha FC.

Odisha was dominant in the first few minutes of the game and their the first shot in the 8th minute through Aridane Santana was off-target after striking from a corner.

For Hyderabad, it took 15th minutes before having any shots at the Odisha goal, but Bobo slammed the ball way high and over the post and the Brazilian then scored a few minutes later but was chalked off after the referee blew for an infringement in the build-up to the goal.

Odisha took the lead in the 27th minute after defender Delgado headed home from a Xisco corner at the far post, Diagne also went close moments later from a similar move this time from a free-kick as Hyderabad looked to be susceptible to set pieces.

Robin Singh went close to pulling one back for Hyderabad, but his shot went a little too high as Asish Rai also had his effort saved only minutes after.

Xisco extended the score for Odisha after Jerry Mawihmingthanga cross fell onto his feet to make Odisha comfortable before half-time, but things turned quickly as Rai conceded a spot-kick and ultimately sent off for touching the ball. Up stepped Brazilian striker Bobo who scored.

Odisha then enjoyed another spot-kick of theirs for another handball by Giles Barnes which Guedes scored to return his side’s two-goal lead, but Rohit ensured a nervy end to the game after his 90th-minute goal, but Odisha managed to hold on for all three points.