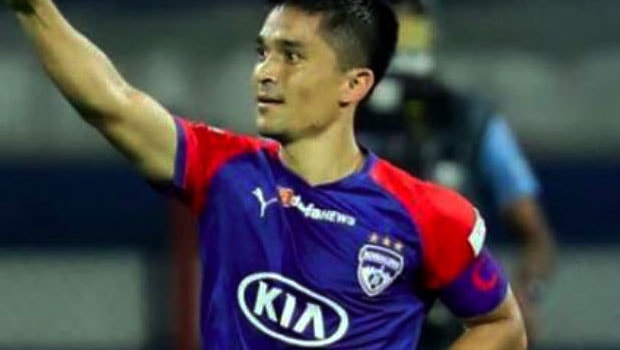 Hat-tricks are special in any form of football but the occasion is memorable if the player gets that while playing for the national team. The Indian football team, at present, is facing a dearth of goal scorers but there have been multiple occasions in the past when players have gone on to score hat-tricks for the national team. Here, we will take a look at three of the most popular players who achieved this feat over the years.

The highest goal scorer of all time for the Indian football team, Sunil Chhetri, has scored hat-trick on three occasions for India, it is also the most by any Indian player till date. His first hat-trick came in India’s 4-1 victory over Tajikistan in the AFC Challenge Cup Final in 2008 and followed that up with another one two years later in a friendly against Vietnam. His third hat-trick came more recently in 2018 when he fired India to a famous 5-0 victory over Chinese Taipei in the Intercontinental Cup match at the Mumbai Arena.

He scored two hat-tricks for India during his career as well and both of those came in the 1999 South Asian Federation Games. His first hat-trick came in India’s 5-2 win against arch-rivals Pakistan and the second one was during their 3-1 win over Bhutan. Vijayan’s formidable form helped India to top the group but went down to Bangladesh in the semifinals. India, however, won the Bronze medal match against Maldives and Vijayan was once again at the helm as he scored one goal in their 3-1 victory.

He scored a hat-trick way back in 1954 against Pakistan in the Calcutta Quadrangular tournament at the Eden Gardens on December 26, 1954. That’s hat-trick helped India to win the match by 3-1 scoreline. India also went on to be the Champions of the tournament and enjoyed an unbeaten streak throughout it. Thapa was also the top scorer during the competition with four goals to his name and that’s what this competition is one of the most savoured in India’s football history.