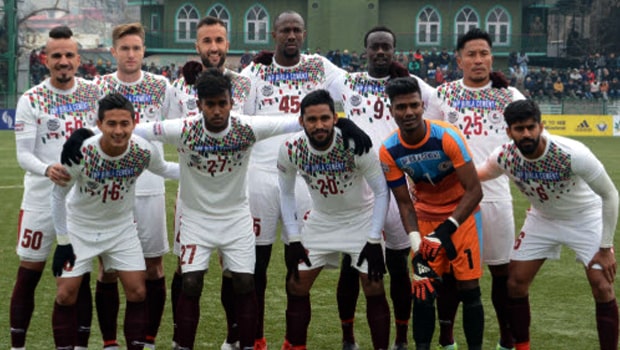 I-League team, Real Kashmir lost at home to Mohun Bagan by two goals to nil in Srinagar as Nongdamba Naorem, and Joseba Beitia were on the scoresheet.

The win lifted the Kolkota side to the top of the I-League after the game played in freezing conditions on Sunday at the TRC Ground.

The game started on a slow note as the first half ended goalless after 45 minutes as Joseba Beitia opened the scoring in the 71st minute while Nongdamba Naorem scored two minutes later for Mohun Bagan to double the lead and condemn the home side and home fans to defeat.

Mohun Bagan controlled the game from start to finish as the coach of the side, Kibu Vicuna handed newly captured striker Baba Diawara his debut.

Real Kashmir were totally unchanged from their victory against Chennai City in the last game.

Having played five games, Mohun Bagan now has ten points from a possible 15 after winning the last three games in a row including games against Gokulam and TRAU FC which ended 2-1 and 4-0 respectively.

It is an impressive improvement for the side which started their season with a loss and a draw against Churchill Brothers and Aizaw respectively.

Real Kashmir, on the other hand, have only won once in their last four games as they drew two and lost once. They sit seventh with 5 points from 4 games played.

Mohun Bagan will face Indian Arrows while Real Kashmir will host Minerva on the tenth of January, a day after Bagan’s clash with Arrows.
Meanwhile, in the second game on Sunday, Indian Arrows and NEROCA FC played out a 1-1 draw.

Sushi Meitei gave away side, NEROCA the lead in the 24th minute while Partap Vikram Singh equalized for the home side two minutes to the break but neither side could find the winner after the break.